Equipment installed onto aircraft goes through a range of tests designed to verify that the component meets the operational needs and environmental factors. For wires and cables, these tests include chemical exposure, thermal, mechanical, and electrical testing. We have already covered mechanical tests in our Assessment of Mechanical Stress on Wire Insulation article, as well as chemical tests in our Building an Electrical Wire Testing Program – Selecting Tests Part 2. In this article, we will cover electrical tests for aerospace wires and cables to evaluate some of the characteristics of wire certification.

Two tests are discussed: “Time to Smoke” and “Fuse Time.” Both of these tests have similar configurations, but each has a specific objective necessary to evaluate the wire and cable reliability.

The objective behind the time to smoke test is to determine the minimum electrical current necessary to cause a wire to produce smoke.

The wire sample is clamped horizontally in a draft-free chamber and connected to the test circuit. The test circuit consists of a DC power supply, the test sample, and an adjustable resistive load.

The test is complete with the first sign of smoke, which will usually occur within the first five seconds of raising the electrical current through the system. Those insulations that have a higher temperature rating are more likely to sustain higher currents.

At the very least, the current that produces smoke should be above the ampacity for the wire gauge. The particular requirements are dependent on wire specifications.

The goal of this test is to determine if an overloaded current can cause the wire to fuse (overheat and separate like a fuse wire). The consideration here is that, even under the worst cases, a thermal circuit breaker would open the circuit within five minutes if at 2.5x the rated current (assuming that the right circuit breaker wire gauge pairing was made (see 7-Step Process for Aircraft Wire Size and Circuit Protection Selection article)).

Using the circuit breaker trip curve information that is provided in MS3320, there is a wide range permitted for the activation of a thermal breaker under overload conditions. By looking at the diagram below, you will see that the blue curve shows the minimum trip time (likely at elevated operating temperatures, e.g. +121oC) and the orange curve shows the maximum allowed trip time (likely at cold operating temperatures, e.g. -55oC). 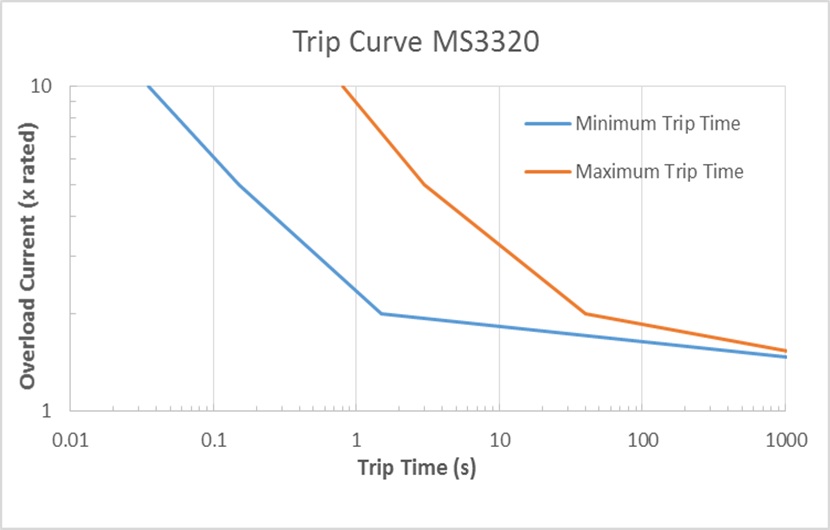 When considering the impact on an in-flight system protected with a thermal circuit breaker, a 2.5x electrical current could potentially last up to 30 seconds.

In this test, similar to the Time to Smoke test, the sample wire is mounted horizontally in free air. The wire is connected to the circuit. A DC power source is attached. The circuit resistance is adjusted so that the constant current through the test is 2.5x the wire rating. This is based on the information from the derating curves of AS50881 (or MIL-W-5088 ).

For example: a 20AWG with a temperature rating of 200C is tested in a lab with an ambient temperature of 20C (ΔT is 180C). The derating curve suggests that a single 20AWG with this ΔT can maintain a 25A current. As such, the testing would be performed with 62.5A. 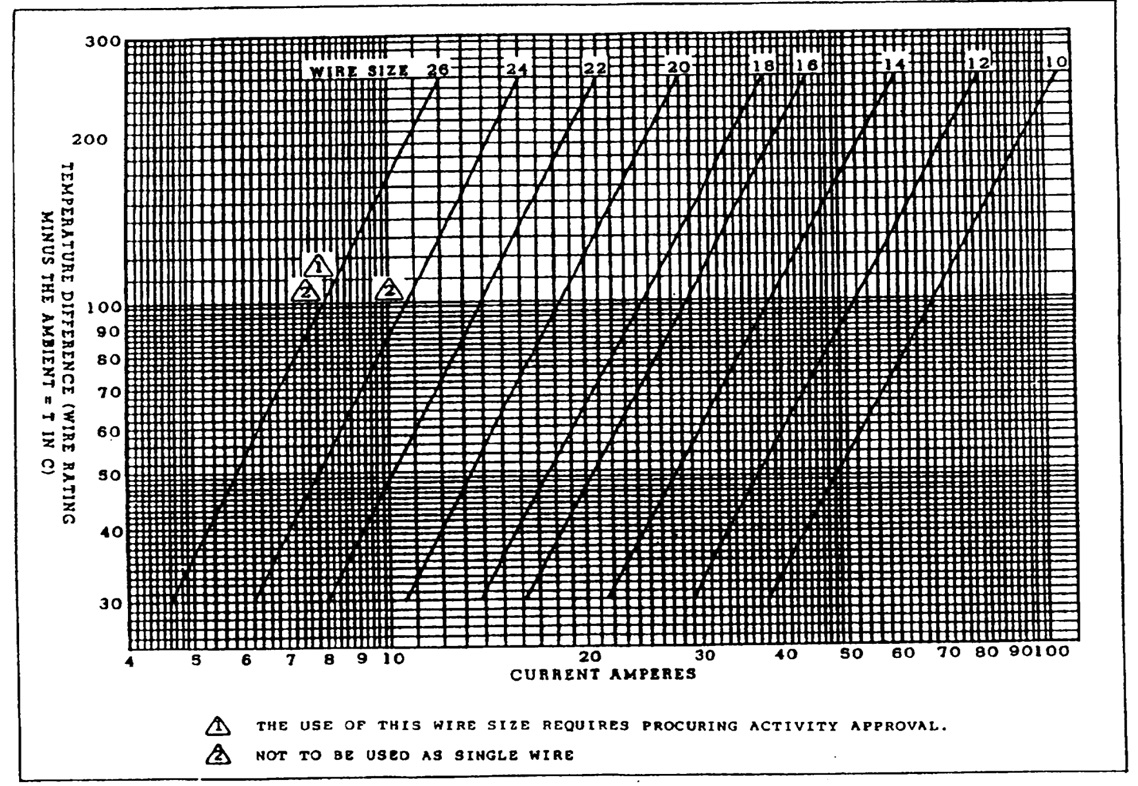 Throughout the test, the sample wire’s resistance will increase due to the increased temperature. The increase of the wire resistance means that the circuit current limiting resistance must be monitored and changed to maintain the desired current level.

Producing wires for aircraft use involves more than applying a polymer to a conductor. Testing is performed to ensure the reliability of the components for long service life and the capability to maintain integrity during fault conditions.