The number of aircraft accidents involving fuel tank ignition has thankfully been very low. However, the growing use of electrical power in aircraft has increased the number of wires and the likelihood of being routed near fuel system components. The increased electrical component density comes with a higher probability of a failure event occurring. In this article (and in a few subsequent articles), we will review several considerations with limiting fuel tank ignition and the impact from a design and installation perspective.

The FAA requirement 25.981 on fuel tank ignition prevention states, “No ignition source may be present at each point in the fuel tank or fuel tank system where catastrophic failure could occur due to ignition of fuel or vapors.” For aircraft fuel tanks, this is a fairly clear requirement and the consequences of failing to do this are easily understood. How to achieve this in design and installation is not an easy task. To aid in the analysis to achieve a certifiable design, the FAA has provided advisory circular (AC) 25.981-1C, “Fuel Tank Ignition Source Prevention Guidelines.” When going through the AC, there are numerous areas that highlight the importance of focused EWIS analysis.

To mitigate the chances of fuel tank ignition and show compliance with 25.981, it is necessary to limit the amount of electrical energy that makes into the fuel tank and that may have to be conducted by fuel or fuel vapor (addressing the limitation of thermal energy will be covered in a future article). FAA research was conducted to determine what is the amount of current necessary to create fuel ignition. Per the AC, it is possible to cause the ignition of a, “flammable mixture when a current of approximately 100 milliamperes root-mean-square (RMS) is applied to the steel wool.” 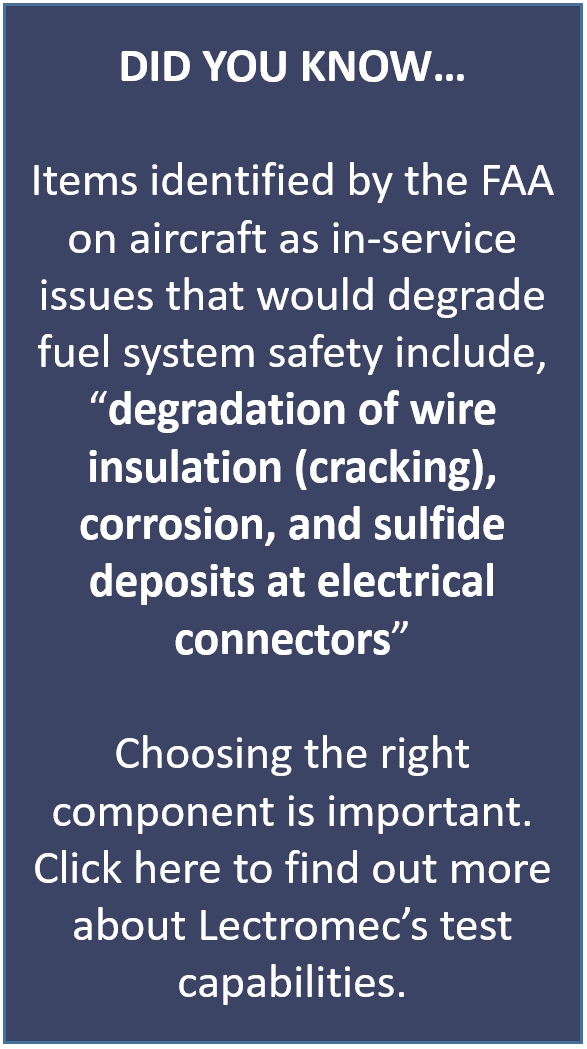 While steel wool is not a common product in fuel tanks, it does highlight that a low current, even at low voltages, can cause fuel ignition. It is necessary to consider the methods by which the electrical systems may introduce electrical energy into fuel tanks.

The prevention of ignition is more than electrical current, but also total energy. Per the AC, “Laboratory testing has shown that the minimum ignition energy in an electrical spark required to ignite hydrocarbon fuel vapor is 200 microjoules.” This is an extremely low energy level. To put this into perspective, an electrical arc connected to a 115VAC system with a current draw of 100A would produce this threshold in less than 0.1microseconds. Furthermore, when considering arc fault protection devices that are specified in SAE AS5692 and AS6019, these devices allow for up to 8 arcing half cycles before tripping, or on a 400Hz power system, 100ms. As such, the power system cannot be assumed to provide the necessary protection factor for internal tank operations.

Therefore, for electrical or electronic systems that introduce electrical energy into fuel tanks, such as fuel quantity indicating systems, any electrical arcs or sparks that are created into any fuel tank should be less than 200 microjoules during either normal operation or operation with failures.

The fuel quantity indicator system (FQIS) is one of the few electrical components that is in direct contact with the fuel. In the basic sense, the fuel probes are installed into the fuel tank and provide data on the quantity of fuel in the given tank. There are several technologies that currently exist for this function. These include:

Which technology is used in this scenario is dependent on the system reliability and the performance in fault conditions not to exceed the specified safe limits. The recommendation from the AC states, “Because there is considerable uncertainty associated with the level of current necessary to produce an ignition source from filament heating, a factor of safety should be applied to this value when establishing a design limit. A maximum of steady-state current of 25 milliamperes RMS is considered an intrinsically safe design limit for electronic and electrical systems that introduce electrical energy into fuel tanks. For failure conditions, limit the current to 50 milliamperes RMS and for lightning induced transients to 125ma peak current.”

In the next article on this topic, we will review the temperature limitation for fuel and some of the considerations necessary for mitigating potential faults.