What to look for with polyimide wire aging

Key to continued aircraft airworthiness is regular visual inspection of the wiring. However, depending on the particular wire insulation installed on the aircraft, the signs of degradation can vary significantly. This article will review what to look for when inspecting polyimide-based wires.

Typically, the first thing to show signs of wear for a polyimide wire is the lacquer topcoat. Over time, this layer will start to degrade, form cracks, and eventually come off the wire in small chips exposing the darker, amber-colored polyimide tape (an example of this can be seen in the photo below).

First signs of wear for a polyimide wire

First signs of wear for a polyimide wire

When this lacquer chips off, it does not mean that the wire is in bad condition. In fact there are cases where the base wire has been used without incident. It does create other issues (such as wire identification), but it does not mean that immediate wire replacement is necessary. However, it is advisable that areas of excessive chipping be more regularly inspected to identify degradation of the base material. 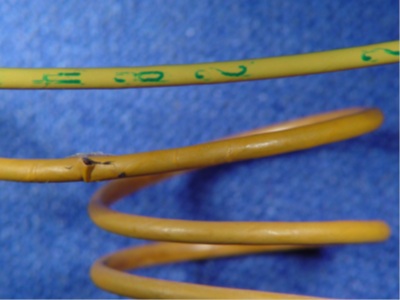 Another area to look for degradation is where flexing or regular bending of the wires takes place. The mechanical strain, particularly when done at elevated temperatures, can cause separation of the wrapped layers. As can be seen in the photo below, when comparing a new straight wire with a thermally aged wire, a breach in the wire insulation along the outside edge of the wire (the area with the greater strain) can be observed. Also, other areas that can signal degradation can be identified by a deformation under the topcoat. This would indicate additional areas of insulation separation.

With further strain and degradation, these ringed areas can become brittle and take the form of radial crack in the wire insulation. This is among the more common failure modes for polyimide style wire insulations. 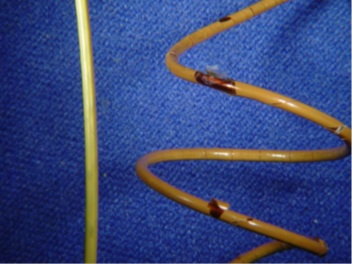 Radial crack in the wire insulation

Radial crack in the wire insulation

As with most visual inspections, if something does not look right, it probably is not. Hopefully this article provides a basis for your visual inspection program. Future articles will focus on the degradation of other wire insulation types.

If you are interested in electrical wiring, you may want to read Lectromec’s Polyimide Wire Life Projection article.