What to look for with composite aircraft wire aging 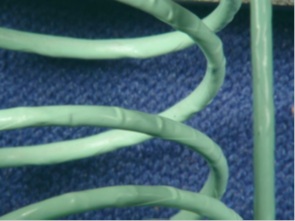 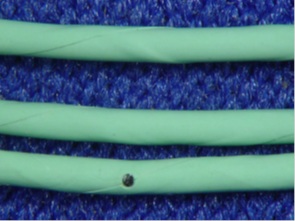 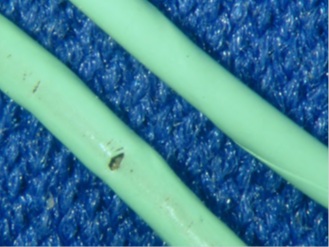 This article continues the theme of identifying different kinds of aircraft wire aging, (see the What to Look for with Aging Polyimide Wire article) by describing the signs indicating when a composite wire is starting to age. To preface, a composite wire construction is based on layers of PTFE (Teflon®) and polyimide (Kapton®) insulation (e.g. MIL-W-22759/89). In all of the composite wire constructions (sometimes called TKT), the outside layer is PTFE. This is done to minimize the effects of fluids (PTFE is very non-reactive). The drawback of this design is that PTFE has a lower abrasion resistance than polyimide. This leads to situations in which, in high vibration areas, the PTFE layer will often be found to have experienced damage while the polyimide layer remains undamaged.

Similarly to the polyimide wire degradation review, after flexing or bending of the wire, the polyimide layer can separate and create bunching. This can be seen in the second figure on the right.

When this happens, breaches in the PTFE top layer may correspond to breaches to the conductor. Furthermore, even without the breach in the PTFE, these folds in the polyimide layer reduce the insulation’s dielectric strength. In some of the tests, the wire appeared to be fully intact, then, during a DVW test, the insulation would rupture with a small hole in the PTFE layer over the polyimide layer fold. A similar result can be seen in the third figure on the right.

Even simple damage can expose a path to the conductor. The topcoat damage to the wire below appears to be benign, but was in fact substantial enough (with accelerated aging) to expose the conductor.

Because of the wire construction complexity, it can be difficult to detect when a wire has sufficient damage. Because of this complexity, is it often necessary to rely on tools that go beyond simple visual inspection. Examination and testing of the wire chemical and physical properties may be needed for your particular application.