Wire chafing can have an impact on wire reliability. The U.S. Navy found as part of a review for the allocation of labor and general wiring practices, roughly $94 million is spent annually in time and materials for the removal of equipment due to undiagnosed wiring problems. This is often referred to as equipment being returned ‘No Fault Found’ or NFF. One simple reason for this is a device is often more readily accessible to maintenance personnel. Wires that connect to a device may come from various points throughout the aircraft, and some may be in hard-to-inspect areas. Further, devices tend to have higher failure rates than wires, so it is not irrational for the first assumption to be that the problem is the device. 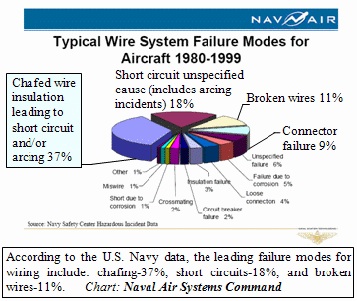 Given the ever growing use of electrical systems on aircraft and the growing complexity of the wiring systems, there is no question why the U.S. Navy projects that between 1 and 4 million man hours a year are spent trouble shooting, isolating, and locating wiring faults. This corresponds to a significant amount of time, beyond scheduled and preventive maintenance, that an aircraft is not mission capable. The NAVAIR research suggests that there is nearly as many hours spent on unscheduled maintenance as on scheduled maintenance.

For a number of years now, the U.S. Navy has placed significant emphasis on Electrical Wire Interconnection Systems (EWIS). The above pie chart shows the wire system failure modes for Navy aircraft from 1980 – 1999. One of the main areas of concern that emerges is that chafing contributed to more than a third of all wire failures. Whether against structure, devices, or other wire harnesses, the wearing down and eventual breech of a wire’s insulation by chafing presents a significant hazard to EWIS. 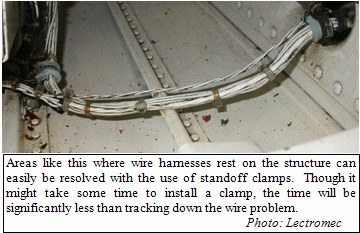 In spite of the fact that chafing is a known problem and the tools to resolve the issue are available, analysis of data from years 2000 – 2004 wire failures modes on Navy aircraft showed that chafing remained the leader of all wire failure modes.

If you are interested in wire reliability, you may want to read Lectromec’s Improving Wire Reliability by Understanding Arcing v.s Protection Schemes article.

The Problem in Commercial Aircraft

Though the commercial aviation industry experiences many of the same problems as the armed services, much of the data are not recorded and\or reported publicly from commercial aircraft. Perhaps the most comprehensive data available on the commercial fleet comes from the inspections mandated by the FAA on B737’s back in 1998. These inspections directed operators to evaluate chafing on fuel system wiring, the results of which showed that more than half of the operational 737 fleet contained wires which had some degree of chafing.

Part of the chafing problem can be handled with the use of clamp standoffs, which should be considered the primary means of reducing the chance for a wire harness to rub against structure. In areas such as at bulkheads where clamps are not practical, chafing tape and tubing should be employed to minimize the potential for chafing.

Though clamps are recommended as the first technique for reducing chafing, they are among the most common locations for chafing to occur. Whether it is due to excessive force during maintenance or flight, the cumulative effect of weight on the wire harness, or by loosening of the connection from structure, the misalignment of clamps significantly increases the potential for chafing by creating pressure points on the wires. Periodic inspections of these for alignment can prove effective for curtailing wire insulation fatigue and chafing.

From an aircraft level perspective, the potential risks created from chafing must be considered prior to installation or modification. Higher vibration zones are likely to contribute to more rapid degradation if not properly addressed. How these components are tested and verified is critical to selecting to the safe and reliable flight of the aircraft. Contact Lectromec to find out more about how we can test and verify your design.