Prior to the launch of the space shuttle Discovery in July of 2005, NASA engineers discovered a previously unidentified hazard. Perhaps they should have gotten a better understanding of aerospace wire reliability. Power wires leading to a heater in the space shuttle were collocated with wires controlling the reaction jets used for in-orbit maneuvers. There were questions whether an electrical arcing event could potentially cause an un-commanded firing of the orbiter thrusters. If the thrusters were accidentally fired while the orbiter was docked or near to the space station, damage to both vehicles was likely and the possibility existed for the loss of one or both of the vehicles.

NASA commissioned Lectromec to explore whether an arcing event, initiated by a failure in the heater circuit wiring, could cause an inadvertent reaction-jet activation. Further, NASA also wanted an evaluation of various barrier materials in an effort to understand which protection schemes might be employed to reduce or eliminate the chance of an accidental reaction jet activation.

Twelve different protection schemes were tested. Multiple experiments were performed on orbiter stock wire, similar to MIL-W-81381/8, in the form of a twisted pair, and shielded twisted pair wires protected by varied combinations of Mystik® tape, PTFE tape (both tape constructions are Teflon® based), and convoluted tubing. Protection schemes were compared on their ability to prevent damage to the twisted or two shielded twisted pairs of wires that represented the reaction jet control wire.

In test configurations where unprotected twisted pair wires were bundled with heater circuits, the reaction jet coils were activated in 90% of the tests. The reaction jet wires were often singed or burned, and on occasion, the wires were completely melted.

Even with the application of various industry accepted wire protection schemes, damage was seen occasionally on the insulation of the target wires.  These tests demonstrated that electrical arcs occurring in wire bundles can damage and sometimes activate adjacent circuits and devices. However, proper mitigation techniques can be employed to reduce or eliminate this risk. 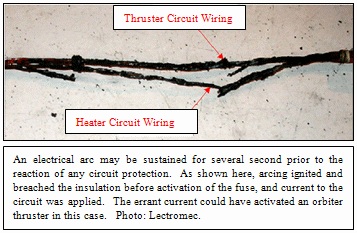 The heater wire was protected by 15 amp fuses; these fuses were not sufficient to stop the propagation of the electrical arc in the wire bundle.  Because devices such as fuses and circuit breakers do not instantaneously ‘break the circuit’ when there is an arc, there can be a period of several seconds in which the arc can be propagated. It was found that this time lag was sufficient to allow other wires in the bundle to become damaged and to sustain an electrical arc, even after the fuse opened on the circuit in which the arc was initiated. This is a significant danger that can arise from routing wires from many independent circuits in the same bundle; an electrical arc can jump from circuit to circuit and in some cases can, in effect, defeat the protection ostensibly offered by circuit breakers.

If you are interested in wire reliability you may want to read Lectromec’s The Importance of Visual Inspection for Wire Reliability article.

Consider a bundle of 50 to 100 wires on an aircraft. If an arc were to initiate in such a bundle, there may be the potential for multiple systems to be damaged. Such damage could not only cause a system to be unavailable when called upon by the pilot, but could also cause the inadvertent activation of a system, such as the thruster jets on the orbiter. For this reason, electrical arcs are extraordinarily dangerous phenomena in the context of aircraft design and safety.

Such cross circuit activation has been seen in the commercial aviation industry. Whether from poor Electrical Wire Interconnect System (EWIS) design, harsh environments, or the contamination of wire harnesses from fluids or other foreign products, wires will fail. This cannot be completely avoided. But with the allocation of some time for the proper evaluation and upkeep of an aircraft’s EWIS, such situations can be handled before they turn into hazards.