Selecting the Right Wires and Cables

In reviewing Lectromec’s articles, one can find over 250 articles covering different segments of aerospace wiring systems and lifecycle. For some, this may be an overload of information. But, if these articles were consolidated to their fundamentals, one can conclude that by selecting the right parts, installing them the right way, and doing the right system level analysis, a robust and fail-safe electrical wiring interconnection system (EWIS) would be created… and that has been Lectromec’s goal from day one.

The first element, selecting the right parts is, without a doubt, is not a trivial task. It is sometimes hard to establish the basic idea that, “not all wires are the same”. That was true back in 2004 (as part of Lectromec’s first article) and is still true today. This article revisits the idea of wire/cable selection and the aspects that should be included in the decision-making process.

When selecting wires or cables, it really comes down to three overall properties: the physical performance, functional performance, and supportability. The physical performance identifies how well the overall construction can hold up to the environmental stressors like abrasion, thermal fluctuations, installation, and exposure to fluids and contaminants. The functional parameters consider signal attenuation and how well wire/cable handles electrical current surges without creating a smoke or fire hazard. Finally, supportability considers how the human factors and the long-term maintenance needs of the equipment play a role in the overall maintenance cycle. 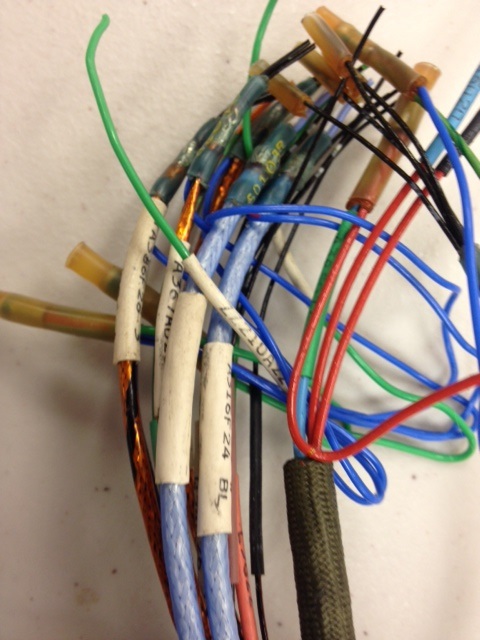 Is it common that there be only one wire/cable that will suit your particular application? No. But there are will be a long list of wrong wire/cables that could be used. Let Lectromec help you find the right one.

Is it common that there be only one wire/cable that will suit your particular application? No. But there are will be a long list of wrong wire/cables that could be used. Let Lectromec help you find the right one.

When selecting a wire/cable, the most important physical parameters are its performance when subjected to temperature, fluid exposure, installation and abrasion at operational temperature. When it comes to temperature, insulation and conductor limitations should be considered. If it is a shielded cable, then the shield plating should also be considered as limiting factors. Overheating of the conductor can cause the plating to rapidly degrade resulting in lower electrical conductivity, greater signal degradation, and greater susceptibility to corrosion.

For fluid exposure, while many aircraft wire/cable insulation types are inert to common chemicals, this should be evaluated for the application. If uncommon chemicals are used in any part of the manufacturing or platform sustainment, the materials compatibility should be evaluated. There are several recent examples of fleets that have implemented a new cleaning or deicing fluid only to cause significant degradation of electrical components. Tests, such as the AS4373 method 601, provide a basis for evaluating wire/cables degradation due to fluid exposure.

Abrasion resistance should be evaluated at operational temperature. How a wire insulation performs at ambient temperature is not the same as how it performs at elevated temperatures. With an increase of as little as 10°C, the performance of some insulation types can reduce by as much as 50%. These change in performance need not be at temperatures of 140°C or higher, but in some cases from 50oC to 60°C. If the installed zone environment experiences high vibration or subject to regular maintenance traffic, then selecting a component with high abrasion resistance performance is recommended.

Functional reliability of wires/cables is necessary to make sure everything else in the aircraft works. But what are the parameters that should be selected or evaluated when selecting a wire? The three factors that Lectromec recommends are the current carrying capacity, signal degradation, and voltage rating.

Signal integrity is a key attribute for RF microwave and high-speed data cables. Signals degrade as they travel on the wire. Signal degradation of a cable is frequency dependent and is not consistent across the frequency spectrum; it is typical that the signal attenuation will increase as the frequency increases. The acceptable level of attenuation is application/equipment/installation dependent and there is not one cable that will work for all applications It is critical to note that signal integrity is highly dependent on cable geometry and electrical conductivity making it critical to consider bend radius, routing, and other environmental stressors. Most concerns with signal attenuation can be resolved with the selection of the correct cables that have been well-tested with respect to application requirements.

Lastly, the voltage rating of the wire or cable should be considered. While the nominal voltage of a circuit may be 115 V, there are numerous cases where transients from either the load or the power supply create power spikes with voltages more than two or three times greater than the nominal voltage. With pulse width modulated systems, these transients are common and frequent.

The result is an increased stress on the wire/cable dielectric. Taken independently, voltage spikes and increased power system frequency would not be a concern, but the combination of the two can cause rapid dielectric degradation. Selecting a wire that recognizes these voltage spikes and has a corresponding enduring insulation performance is recommended.

Each supportability factor is a basic logistical consideration for any component, and the same considerations should be given to any wire, cable, or connector placed onto an aircraft. To select a component that is no longer available after 10 years or cannot be maintained because the tooling has disappeared, will only create problems.

When selecting a wire/cable, the application-specific parameters are the most important. However, they cannot be selected in a void. Other considerations such as supportability and maintainability are necessary to ensure that the initial design can be supported throughout the entire lifecycle. Furthermore, to maximize that performance during operation, both the component’s physical and functional parameters must be understood and tested appropriately.

To get the most out of the systems and of your designs, contact Lectromec. One consultation with Lectromec can save money and prevent headaches by eliminating costly EWIS down the road. We can help you select the best component for your application.