The primary purpose of power over ethernet (PoE) is to use a single ethernet cable to provide a datalink and low-level power to devices. Since PoE became standardized in 2003, it has been implemented on a large range of ground based applications. There are several benefits to this implementation which include cable that is easily procured, easy to terminate, and safe for a wide variety of uses.

As with all things implemented for aerospace, stricter requirements are placed on the cable and implementation. This article reviews some of these ideas and proposes a couple of considerations

Category five (CAT5) cable has been around since the 1990s. Although the cable is only rated for use up to 100Mbps (1000 Mbps for CAT5e), the reason for its continued use is that it performs very well in its designed application: static positioning for data transmission. The CAT5 cable is designed with four twisted pairs of wire enclosed in a shield and jacket. Typically, the wire gauges used are 24 AWG.

Depending on the application, the power may be transmitted in one of two ways:

When considering PoE from an aerospace EWIS perspective, there are several issues that must be addressed prior to implementation.

Typically, power over ethernet applications are DC and provide a consistent voltage and current to the target device. If there is no current change, the inductance is limited and no EMI is generated. However, if the load rapidly turns on and off or uses AC power, then this EMI can have an impact on the nearby wires. Furthermore, in many applications, power wires and signal wires are specifically separated to mitigate any potential signal integrity degradation. The grouping of power wires and signal wires into a single cable compromises design practice. 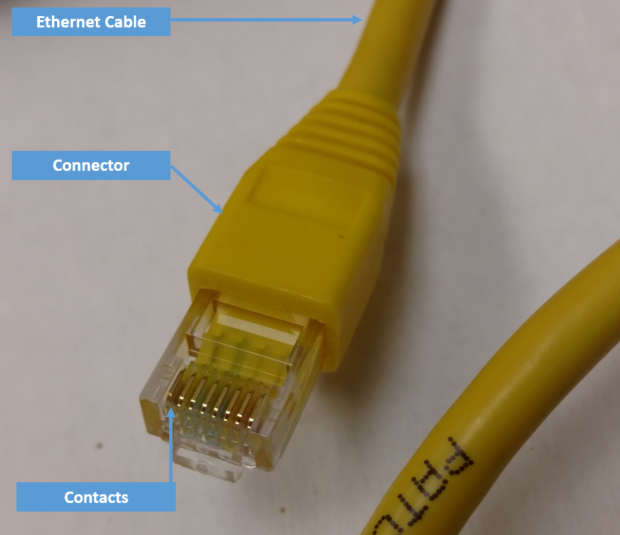 The electrical contacts for ground based ethernet cable implementations are designed for limited current applications and for very little physical disruption. For PoE applications where the voltage and current connections are increased for power applications, these stress the contacts and can accelerate wear. Some in the aircraft industry have attempted to use ground based ethernet connectors and have found that the vibrational environment will cause series arcing on the contacts and rapid contact degradation. Further, the heat generated by the series arcing can damage the cable and nearby components.

For those familiar with wire system design, what is the maximum amount of current that can be placed down a 24 AWG wire? The quick answer is no more than 5 A, and the longer answer is that it is dependent upon the environmental characteristics and the wire harness in which it is routed. Some implementers are finding that these higher currents are causing the cables to overheat. Other implementers have found that improper quality assurance controls have caused even greater problems requiring entire rewiring due to use of installed ethernet cables were built with undersized conductors (26AWG or smaller conductors).

While several areas have been identified where power over ethernet can create problems, this should not be taken as a rejection of the PoE design idea. PoE does have its applications and can be used in an effective and safe manner. But it should be noted, that the idea of power over ethernet can be applied to other similar cable constructions. An example is the AS 6070 construction which is an impedance controlled cable that can offer the same or better performance capabilities and is certified for use in aerospace applications. If you are not sure if you wire is correct for the intended application, contact Lectromec. We can help you move from an unsafe, non-airworthy design to a reliable, safe, and certifiable system.