The aerospace industry has been dealing with Electromagnetic Interference (EMI) and Electromagnetic Vulnerability (EMV) since the early 1900s. EMI can cause interruptions ranging from poor signal quality to an overall system malfunction, which can result in devastating outcomes for any type of plane.

EMI is generated by natural phenomena like lightning and static electricity (called natural EMI sources), as well as by cell phones, airport towers, airborne transmitters (from a nearby aircraft in flight, for example) and ground-based satellites. The main rationale behind flight crew instructions to passengers on commercial flights to turn off their cell phones and other electronic equipment prior to aircraft takeoff and landing is related to concerns that EMI could cause unpredictable aircraft behavior and interference with the navigation system. For example, the cause of the 1964 crash of TWA Flight 800 (a Boeing 707) remains unclear, but may have been related to EMI. In 2011, ABC News reported on an industry study that documented about 75 separate incidents of possible electronic interference that airline pilots and other crew members believed were linked to mobile phones and other electronic devices. Even a heart monitor has the capability to cause interference with the aircraft’s electronic systems.

The aircraft systems that are most vulnerable, also known as EMV systems, are navigation and communication systems, autopilot, the fuel sensor, yaw dampers, and auto-throttle. It is very important to use precautions and follow the standards in place to minimize any sort of interference from outside circuits or systems. It is impossible to eliminate all sources of EMI on aircraft, because there are so many types of EMI, including cosmic noise. There are, however, some important methods to eliminate most interference and decrease the chances of EMI.

One of the key factors is the type of wires used on the aircraft and how they are installed. The AS50881 wiring systems installation manual recommends the MIL-C-85485 cable, which is an RF cable for systems that require radio frequency functionalities. They have different shielding and more layers than normal cables, as shown in the figures below:

The shielding in this type of cable is braided to reduce the electromagnetic energy in a particular area to ground. This braided shielding is especially effective at minimizing low frequencies, and it provides maximum EMI protection while maintaining good flexibility. This layer configuration for RF cables can eliminate up to 95% of EMI with appropriate installation by following the AIR4465 Filter Line Handbook. The handbook is very useful for learning about the necessary spacing between the main RF cable and other circuits and systems to decrease EMI.

The main topic discussed in this article is the effect of EMI/EMV on aircraft; it also examines the various sources of EMI, including man-made electronics devices and natural phenomena. It is important to understand that an electronic device can affect the functionality and destroy or wipe out the signals of an aircraft. Installing the right type of wires and protecting them as recommended in AS50881 is critical to protecting the aircraft from any sort of EMI/EMV. 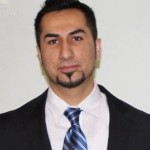 Omid is an EE with a background in electrical system design and analysis. Since he started with Lectromec, Omid has worked on a variety of projects including wire failure assessment, equipment design, and EWIS degradation.