As with most fields, the more we learn about a particular topic, the better our understanding of its complexity and the finer details involved. One area Lectromec has done extensive research in is the potential impact of wire failure and electrical arcing (you can find several blog posts and white papers here). In this article, we would like to share recent research conducted by Lectromec on an area that received little attention in the past.

The FAA regulations on Electrical Wiring Interconnection System (EWIS) separation are defined in FAA regulation Part 25.1707 and physical failure risk assessment in 25.1709. According to the regulations, wire failure should not impact the aircraft’s airworthiness. To show compliance, the first level is to determine the loss of function (such as with a broken/loose conductor), then the physical impact (arcing). 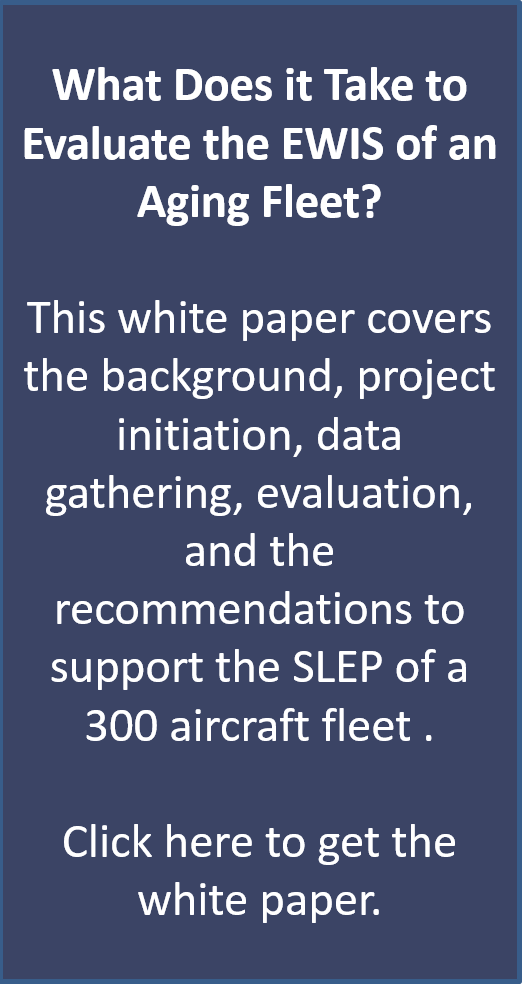 Lectromec’s first video describing the arc plume was released in 2008. It highlighted the wire failure arc energy and the potential damage to nearby components resulting from the hot ionized gas released from the event.

However, the video did not address a particular consequence of arc damage: the potential damage of molten metal. When the molten metal leaves the arc area, it departs at a velocity that can carry it several feet from the arc initiation site. The concern is that the molten metal from the event may come to rest on a target and create an unsafe condition.

With everything in place, the power was turned on and the arcing began.

There are two things that should be kept in mind when viewing the video. #1: The direction of the arc plume (see the article discussing arc plumes) and #2 the molten metal that comes from the wire arc location and makes contact with the representative fuel tube. Both of these can potentially cause an unsafe condition.

Aircraft wire harness arcing failure captured through UV filtered lens at 300fps. A significant amount of copper was transferred from the arcing wires to the fuel tube.

Aircraft wire harness arcing failure captured through UV filtered lens at 300fps. A significant amount of copper was transferred from the arcing wires to the fuel tube.

As can be seen in the photo to the left, it is clear that the arc plume from the event is large enough to envelop the tube. In this test, even though the tube was electrically grounded, there was no direct arcing (this would have quickly resulted in a tube wall breach). What can be further seen from the still image and video is that most of the molten metal that struck the tube was deflected away from the event. However, the post-test analysis found that there were several bits of molten metal that adhered to the fuel tube. The molten metal ranged in size from 0.1mm to 4mm in diameter.

How much damage the molten metal can do is entirely dependent on the tube size (or fuel tank wall), the material, and several other key parameters. Several simulations were run with Lectromec’s Arc Damage Modeling Tool (ADMT). The simulations results suggest that it is entirely possible for some of these larger molten metal pieces to heat the target and cause the inside wall to rise above the autoignition temperature of fuel vapor. Other simulations showed that it is possible to cause pressurized tube rupture with the molten metal from the arcing events.

Comparison with the Previous Testing

Some of the work that Lectromec performed with the FAA in 2006 suggested that the molten metal may not have been much of a concern (report). But with further research, it appears that the conclusion may have been made too early. Testing carried out for the FAA, primarily focused on the potential arcing and damage caused by 20AWG wires. The molten metal produced by the smaller wires had less energy and was not considered a concern. The results of these recent tests however, suggest that the molten metal from such events must be considered as part of an EWIS failure impact analysis and risk assessment.

Lectromec’s laboratory is equipped to perform the high power tests needed for arc damage assessment. We can make sure that the tests generate the test data necessary for EWIS certification. Even if your aircraft are not subject to Part 25 EWIS regulations, these tests can provide you with the data you need for improved wire system design.