In Lectromec’s previous article, we introduced a basis for estimating connector failure rates. The framework utilized the failure information available from military handbook MIL-HDBK-217. In this article, we continue to review the parameters of the failure rate function and implications on how slight changes in the environment can have a dramatic impact on a connectors reliability.

As established in the previous article, different connector types are assigned different failure rates. Primarily, the connector insert plays a critical role in the estimated failure rate, as does the operational temperature and the number of contacts and power passing through the connector. As an example, if a four pin 38999 connector, with silicone rubber supporting insert, and 4 Amps on each of the size 20 contacts, the base failure rate comes to:

Plugging in the parameters we find that ƛD= 0.000316. Looking further into this information and failure probability model, we see that there is a correlation between the increase in temperature and the proposed failure rate. Comparing a connector that is used in an operational temperature of 20°C with one that is at 120°C, we find that the 120°C connector has a 10 times greater failure rate. If the temperature is increased another 20°C (to 140oC), then the failure rate increases to 15 times that of the connector at 20°C.

While this is a generalized model, this model suggests that if given the choice between routing power through one connector versus two connectors as a means of reducing the temperature, there could be a sizable reliability improvement simply by splitting the power out. Another option would be to use a connector with larger contacts to reduce the temperature increase. 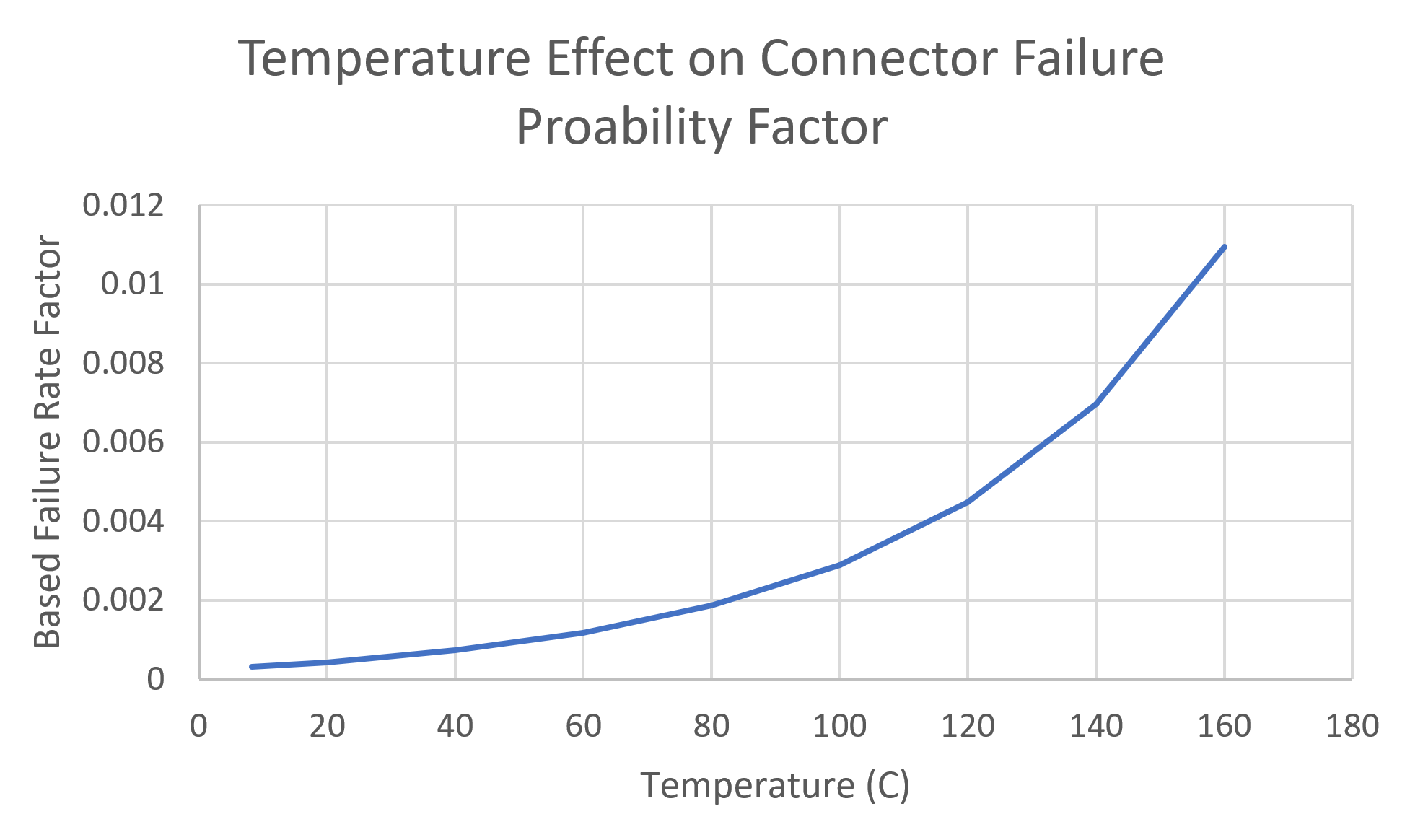 Is a common factor among electrical components that they degrade with exposure to elevated temperatures. Understanding how much of an impact temperature has can help you better predict the remaining reliability of your components.

Is a common factor among electrical components that they degrade with exposure to elevated temperatures. Understanding how much of an impact temperature has can help you better predict the remaining reliability of your components.

The mating factor of the connector failure model is straightforward: how frequently is the connector disconnected and reconnected? As one would expect, the more frequent the demating and mating of a connector, the more likely it is to suffer the failure. Interestingly, the mating/demating failure factor, has a limited impact. Connectors that are frequently mated only have a four times greater failure rate than those that are infrequently mated.

The number of active pins in a connector has a direct correlation to the failure factor associated with it. An interesting point about the active pins calculation is the active contact count includes any conductive element in the connector that mate to transferring electrical energy. For coaxial and triaxial connectors, this formulation includes the shield contact as an active contact.

One interesting item to note in the MIL-HDBK-217 table provides different loading factors based on the quality control system used in the component manufacturing. Those materials that are identified as MIL SPEC parts have a greater reliability factor, whereas non-controlled parts, on average, are assigned a 2 to 5 times greater expected failure rate. While the handbook specifically identifies military specification as the preferred quality control process, other quality control processes that regularly evaluate performance should be considered here.

Using the MIL-HDBK-217 as a basis, it is very easy to develop a conservative estimate on component reliability and the associated failure rates. For those seeking aircraft certification, if no data is available on the failure rates of parts, this handbook can be a good first step. However, as the field data becomes available, the model and the numbers should be updated to reflect actual failure rates.