When should you consider adopting an aircraft wire life extension program? Part II

This is the second in a series of articles addressing the concepts associated with an Electrical Wire Interconnection System (EWIS) analysis of aging aircraft. In other words, when to consider an aircraft wire life extension program. The last article addressed the reasons to consider implementing EWIS assessment as part of a wire life extension program. This article reviews the fundamental concepts behind risk and risk assessment and how it is applied to an EWIS investigation.

If you are interested in wire life extension, you may want to read the The Big Three Wire System Degradation Assessment Options article.

Let’s start with what should be the first question, “What is risk?” Risk is often a misapplied term. When applied to an engineering process or assessment of a system, risk can be simplified to being a combination of failure probability and failure severity. 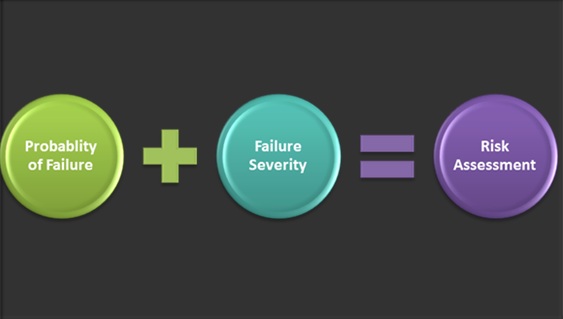 Risk is easy to understand. Understanding how to put it all together takes data and analysis.

Risk is easy to understand. Understanding how to put it all together takes data and analysis.

The probability of failure is a numeric quantity that is typically based on field data or laboratory analysis that determines the degradation of the wire (more on this in future articles). The probability of failure then paired with the qualitative assessment on the failure severity. The acceptable level for combined probability and severity is dependent upon the actual use. A low value system may have a high probability of failure and may not need to be resolved, whereas a high-value/mission-critical system must have a much lower threshold. It is the analysis of these two factors that is central to an EWIS assessment for an aging aircraft.

Suppose only the probability of failure were examined for the wiring on the aircraft. What would this accomplish? There would certainly be benefits from this:

While these are all good metrics to be used to assist in making determinations for the life extension program, there are weaknesses of only examining the probability of failure. Some of these shortcomings include:

In some cases, it may be tempting to focus on a single aspect of the risk assessment, namely, the probability of failure. If all of the poor quality harnesses are replaced, then will not the aircraft be in like-new condition? True, but there are disadvantages to this:

As identified earlier, determining the severity of failure is important to the overall EWIS risk assessment process. In particular, it seeks to determine where failures can have the greatest impact on the aircraft airworthiness. In determining the severity failure, it is necessary to both consider the functional impacts to the aircraft (which systems are affected by a failure) and the physical impacts (what may be damaged may be caused from a wire failure).

Alone, the severity of failure does provide valuable insights into the aircraft:

While these are beneficial, it should be clear why this needs to be paired with the assessment of the wire condition. These two factors when combined provide a clear, cohesive picture of the current aircraft EWIS health, directed to focus on what matters most: a fully functional airworthy aircraft that can be maintained in a cost effective manner.

The next article in this series will focus on probability of failure assessments and how they are applied to aging aircraft.