When should you consider adopting an aircraft wire life extension program? Part III

This is the third article in a series addressing the concepts associated with wire life extension and an Electrical Wire Interconnection System (EWIS) analysis of aging aircraft. The When should you consider adopting an aircraft wire life extension program? article addressed some of the fundamental concepts behind risk and risk assessment and how they are applied to an EWIS investigation. This article focuses on the assessment of failure probabilities for aging aircraft.

Like all devices, a wire is subject to the three standard portions of a device life cycle which include: infant mortality, random failure, and wear-out (more about this process can be found in the Wire Failure and Wire Component Lifecycle article). Infant mortality of devices is associated with manufacturing or installation flaws in the wires; these are detected early and are replaced. The majority of a device’s life is in the random failure portion. Here, device failure is associated with random occurrences such as damage during maintenance actions. The final portion of the device life cycle is the wear-out: parts begin to have reduced performance and eventually stop working as designed.

To determine where the wire is in the life-cycle, the natural first step is to do a physically examination of the wiring system. Visual examinations are able to identify the more obvious damage such as chaffing, pinched wires in clamps, and exposure to possible corrosive fluids. While these are important to identify and resolve, wire insulation degradation is not always visible. Micro-cracks in the insulation or heat damage caused by electrical overloads are difficult to see in an individual wire, much less in an entire bundle of wires.

Below is an example of cracks in the topcoat of the wire insulation. These are easy to see when the wire is wrapped around a mandrel, but incredibly difficult to find if straight and in the middle of a wire bundle. 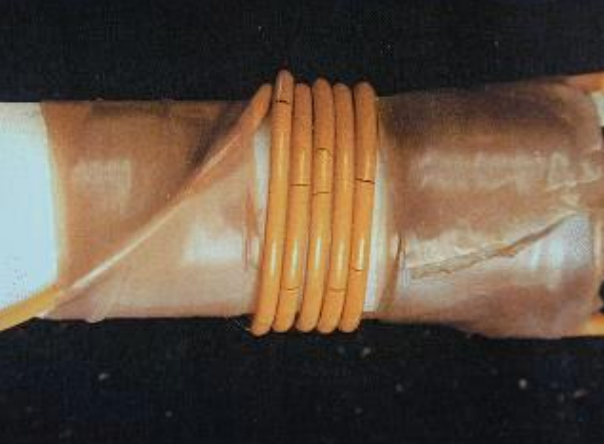 The cracks are down to the conductor

The cracks are down to the conductor

During the Intrusive Inspections performed by the FAA in 2000, a trained team visually inspected wire bundles with the goal of reporting breaches or damage to wires. For one bundle that underwent a thorough visual examination, two wire breaches were found. The same bundle was then selected for additional testing (DelTest™) to be performed by Lectromec. Lectromec’s testing found 60 insulation breaches that exposed the wire conductor (all insulation breaches were independently verified). Thus, visual examinations alone are not sufficient to determine the wires’ condition.

To further complicate the work of visual examination, there are wide differences in the insulation chemical compositions. Different insulation types have different failure modes which present under different chemical, mechanical, or thermal stresses. Each wire insulation type has its strengths and weaknesses. Some do well under one set of type of stress (e.g. fluid emersion) while fail under other types of stress (e.g. repeated mechanical strain).

Regardless of the type of insulation, as the wire ages, it becomes more susceptible to failure. Cracks and tears are more easily formed during maintenance actions and the insulation is more easily worn down from chaffing or being pinched at a clamp. Overtime, cracks in multiple wires will occur in close proximity to one another allowing for crosstalk or power conduction.

To determine the health of the wiring itself, it becomes necessary for accelerated aging testing and/or chemical degradation analysis. The specific process for determining the health of the wire is dependent on the objective and the material type. Some of the tests that may be performed include WIDAS, Inherent Viscosity, or Wirelytics (coming soon from Lectromec). The results of these tests which perform accelerated aging and chemical degradation analysis on the wire insulation are used to determine the remaining life of the wire.

The ‘remaining life of the wire’ is a concept that describes where the wire is in the device life cycle. This is not to say that the remaining life is the time at which all wires will fail (a failure defined as a breach that exposes the conductor); rather, this sets an expected threshold at which the degradation related failures would begin. 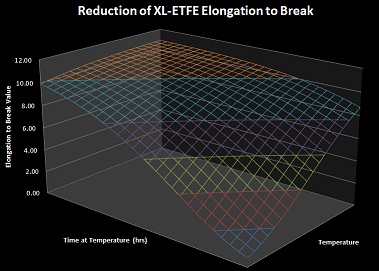 For most wire types, insulation degradation is not a simple linear process. As identified earlier, a number of factors affect the degradation process. To determine the degradation evolution of wire insulation, a great deal of research is necessary to identify the reliable life limit (the point at which the failure probability is expected to increase). The figure on the right shows an example of some of the research Lectromec has performed on XL-ETFE insulated wires.

Lectromec has performed this research on most modern aircraft wire types and continues to perform additional testing to better improve these proprietary analysis techniques. It is this research that Lectromec relies upon for assessing the current wire conditions and projecting the remaining life of the wire.