What Are You Missing from Your Risk Assessment?

Creating maintenance action plans for vehicle sustainment is a heavily detailed process involving the collaboration between multiple groups. If any group has a less detailed (or flawed) analysis, the potential impact could be felt for years/decades to come. A structured process for assessment is outlined in the mechanical subsystems integrity program (MECSIP) outlined in military standard MIL-STD-1798. Within this, the analysis of several subsystems is called out, including the wiring system.

One of the most complex areas of EWIS assessment is the fifth task: EWIS risk assessment . Here a large network of interconnected information that must be organized and analyzed. It is certainly possible with so many data elements needing evaluation, inspection, and consideration, that some areas will be unnoticed or outright ignored because of the analysis needs. If not handled correctly, some areas could be overlooked and have a significant impact on the overall reliability of the delivered analysis.

In this article, we consider critical areas that could be missing and how they could have a substantial influence on aircraft sustainment and maintenance.

One topic that is covered in numerous Lectromec articles is risk. Simply put, risk is a combination of failure severity and failure probability. If one of these is misunderstood, misclassified, or not fully evaluated, the risk determination will be flawed. For example, if an assessment looks at the probabilities of car breakdown and only focused on the engine, then it will be a surprise when there is a flat tire. So too is the case for the wiring system. By understanding the evolving probabilities of failure, it is possible to better maintain the vehicle. 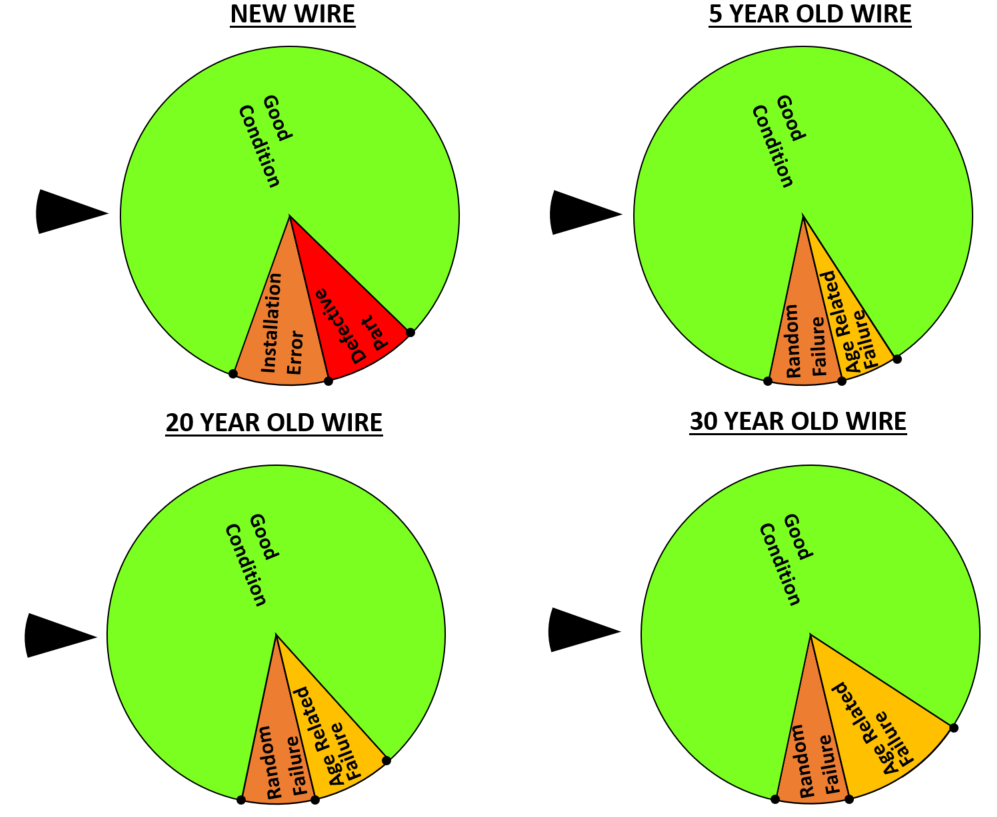 The likelihood of EWIS component failure is based on several factors, but they can be predicted. This predictive ability provides users with the best possible means for proactive action on their aircraft.

The likelihood of EWIS component failure is based on several factors, but they can be predicted. This predictive ability provides users with the best possible means for proactive action on their aircraft.

The critical separator here is how the EWIS failure probability is determined. If the EWIS evaluation is only a current condition assessment, then the subsequent EWIS risk profile is only defined for a single moment in time – the current state of the system. An example of this is shown in the accompanying figure. In the configuration shown here, we see that there is one wire harness that should be replaced, based on the parameters defined early in the assessment. Review of the other items has shown that they have some performance degradation but not to the point of needing replacement.

What Could be Missing?

What will be helpful at this point in the assessment would be to see how probability of failure or degradation will impact the risk over time. If EWIS component degradation predictions were available, then it would be possible to see how the risk will evolve over a 5, 10, or 15-year period. 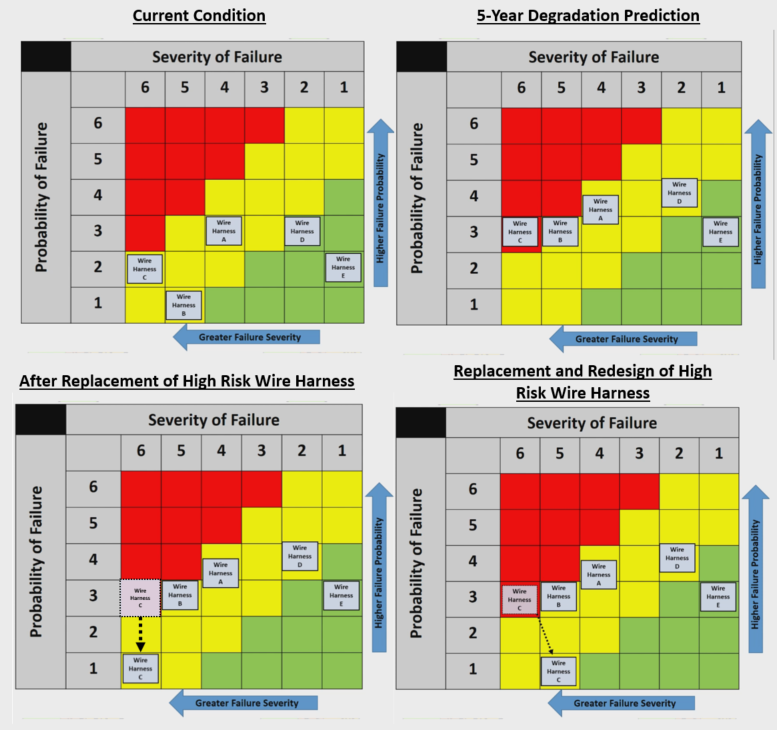 Risk can be determined and future risk can be predicted. This makes it possible to be proactive with your maintenance.

Risk can be determined and future risk can be predicted. This makes it possible to be proactive with your maintenance.

By evolving the probability of failure, Lectromec’s degradation models, environmental information about the zone, and the current condition of the aircraft, it becomes possible to predict forward for better planning than previously possible.

The figure here presents what can happen with predicting an additional 5 years for this aircraft. The degradation model suggests that, with five additional years of continued use, an additional wire harnesses (or zone) within this aircraft has reached a point of high risk.

Consider how this would impact the aircraft maintenance. If only the first risk assessment (sans EWIS degradation prediction) was available, then wire harness replacement would likely only be called for in one area of the aircraft. If that aircraft was again assessed five years later, then another round or harness replacement would be called for resulting in a new set of maintenance actions, more aircraft downtime, higher cost, and additional risk to the personnel on board during the four to five-year period of operation.

Now consider how the maintenance actions would be prepared if the information was originally presented as it is in figure 2. The maintenance planning could identify all areas of the aircraft needing replacement (or more focused maintenance). Further, it might then also be possible to concurrently perform the necessary actions to restore airworthiness.

Getting to the Solution

Getting an aging risk profile for an aircraft’s EWIS is not a trivial task; it is a task that takes a significant amount of planning coupled with the right tools. If done right, the data from this assessment should support EWIS decisions and budget allocations for several years.

Lectromec’s experience with the EWIS of aging aircraft makes it possible to get the most value from these efforts. Settling for a lower quality solution only can hurt fleet reliability. Use the right tools to protect your aircraft and its wiring system. Contact Lectromec.