Should Polyimide Insulated Wire be Trusted?

The history of polyimide insulated wire is one that has numerous opinions and a lot of misconceptions. After several incidents involving polyimide wire in military and commercial aircraft, many within the aerospace industry refused to put any polyimide insulated wire/cable onto the aircraft they design/maintain. As is often the case with components involved in incidents, a lot of facts and myths get jumbled together.

To help shine light on the topic, we look to cover the history of polyimide (both the good and bad) and the potential future of the material in aircraft systems.

Where Did It Come From?

The polyimide material was invented in 1955 and it was immediately identified as great insulating material with excellent mechanical properties. Other strengths of polyimide include its fantastic resistance to flame, performance in radiation intense environments (those who remember the Voyager spacecraft will recall a lot of the amber colored coatings on the vehicle, this is polyimide), and the great physical toughness. These properties were advantageous for several applications including circuit boards.

Seeing the benefits of this material as an insulator, manufacturers sought to take the polyimide material, manufacture a tape, and wrap it around a conductor to create a wire. Given the aforementioned mentioned properties of polyimide, this was a natural progression for the material. 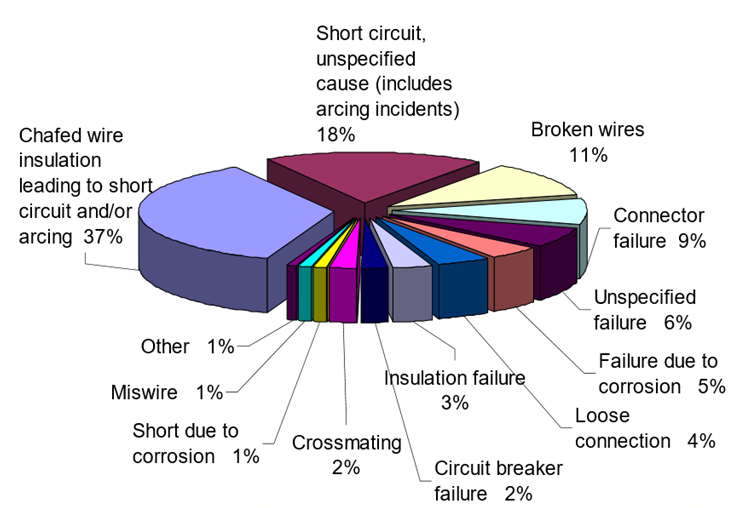 Chafing damage to wire/cable insulation are a primary mode of failure for wiring components. The physical toughness was (and still is) a huge selling point of polyimide; among the common aircraft wire insulation materials (PTFE, ETFE, and Polyimide), polyimides ability to endure extended durations of chafing is an easy sell.

Polyimide became quite a popular material and could be found within numerous vehicles (military, commercial, etc.); and then the problems began (Lectromec has covered several of the incidents and problems with polyimide in papers and articles). In summary, the polyimide polymers degrade very quickly when exposed to a combination of heat, humidity, and mechanical strain. This degradation is greatly accelerated when formed into a thin tape tightly wrapped around a conductor.

Unfortunately, this degradation mechanism was not anticipated as there were no specific testing outlined in the product qualification standard that would identify this problem. In application, some of the polyimide wires degrade very quickly and lead to electrical arcing events. Polyimide film wire is extremely susceptible to carbon arc tracking.

In the early 90s, the threat posed by polyimide was well-established and began to become a feared wire for use on aircraft. This is reflected in the ban the Navy placed on installing polyimide wire for new aircraft applications in 1992. Similarly, OEMs and maintainers began to look for alternatives to polyimide insulated wire but did not want to lose the mechanical performance polyimide provided.

Wire manufacturers saw the positive elements of polyimide wire and worked with the polymer manufacturers to develop improved materials and wire constructions. By the end of the 90s, the polyimide tape used for wire insulation had an additional coating on the tape to make it less susceptible to degradation in high humidity environments. To further reduce the exposure of the polyimide insulation to humidity, wire constructions paired polyimide with a PTFE top layer; this PTFE top layer also helps to reduce the threats from arc tracking.

Today, there are a wide range of wire constructions that include a layer of polyimide and PTFE. This provides the combined benefits of polyimide’s mechanical-strength/abrasion-resistance and the fluid resistance of PTFE. Further, these are one of the few construction types of wire that can perform well in high temperature environments (up to 260°C).

The Threat to Aircraft

It is important to realize that polyimide insulated wire, when used properly and with good wire constructions, is not a threat to modern aircraft. Modern wire constructions that employ the combination of polyimide and PTFE (e.g. AS22759/80 – /92 and /180 – /192) require qualification testing to determine their arc track susceptibility (e.g. AS4373 Method 508 and 509). These wire constructions have tight performance requirements permitting only a few wires to fail the post-test dielectric evaluation.

The wiring system and individual components performance requirements should be reviewed. Does it make sense to have such high standards on the arc fault performance of a wire when it is paired with a device that should, in theory, reduce the electrical arcing event duration to less than 10% of what is possible in an event using the thermal circuit protection? The answer to questions like this will define the next generation of EWIS.

The polymer known as polyimide has great mechanical properties for an insulator and is a good choice for wire insulation. While the past of this material is not without issue, employing wire constructions with this material for modern application is entirely reasonable. But to do so requires verification of the wire/cable performance through methodical testing and analysis.