The environmental extremes under which wiring exists in aircraft can rapidly degrade materials that are not prepared or designed for those conditions. Without a doubt, high-temperature ranges that are typically considered for aircraft wiring eliminate most wire insulation types that are suitable for ground-based home applications. Lectromec has covered several types of high-temperature tests in past articles.

But at low temperatures, what tests exist to help identify which wires are ideally or adequately suited for aerospace applications? One of the tests that investigates the performance of wires in cold conditions is known as the cold bend test.

From an application perspective, it is entirely likely that a wire in a non-environmentally controlled zone of an aircraft will be at -55°C while the aircraft is at cruising altitude. Any wiring attached to a surface or panel that may move during flight must be able to move without creating wire/cable insulation cracks.

For those wires installed in the non-environmentally controlled zones, it is entirely probable that the wire will be at the low-temperature extreme during flight then rapidly increase to 30°C during the descent. During that transition, the wiring and wiring harnesses are very cold and moisture in the air will condense on the wiring. This moisture can work its way into the insulation cracks and start to cause signal degradation or lead to an electrical arcing event. To be in line with regulation 25.1703, each EWIS component must be installed according to the limitations of its components. To determine that a wire/cable will not degrade during performance, testing must be done.

While there are several test methods that are industry accepted for cold bend testing, they all follow a very similar process. In this test, the wire is placed in a low-temperature freezer until it is thermally stable at the low-temperature. Typically, this temperature is between -65°C and -55°C and is dependent upon the particular test procedure. After the set duration, the wire is then slowly wrapped around a large mandrel. The intention of this slow wrap around a mandrel is to prevent undue stresses on the insulation that may lead to cracking.

When considering the test method for the evaluation of wires at cold temperatures, it is important to understand that the stress and mechanical bending is done very slowly. Lectromec has seen guidance to maintainers suggesting freezing cold compresses air should be sprayed on wires and connectors to help find intermittent faults. Rapid flexing of wire insulation at the cold temperatures can cause rapid degradation of the insulation and quickly lead to stress cracks. It is not recommended for use of cold compressed air to freeze wire harnesses as part of a troubleshooting processes. 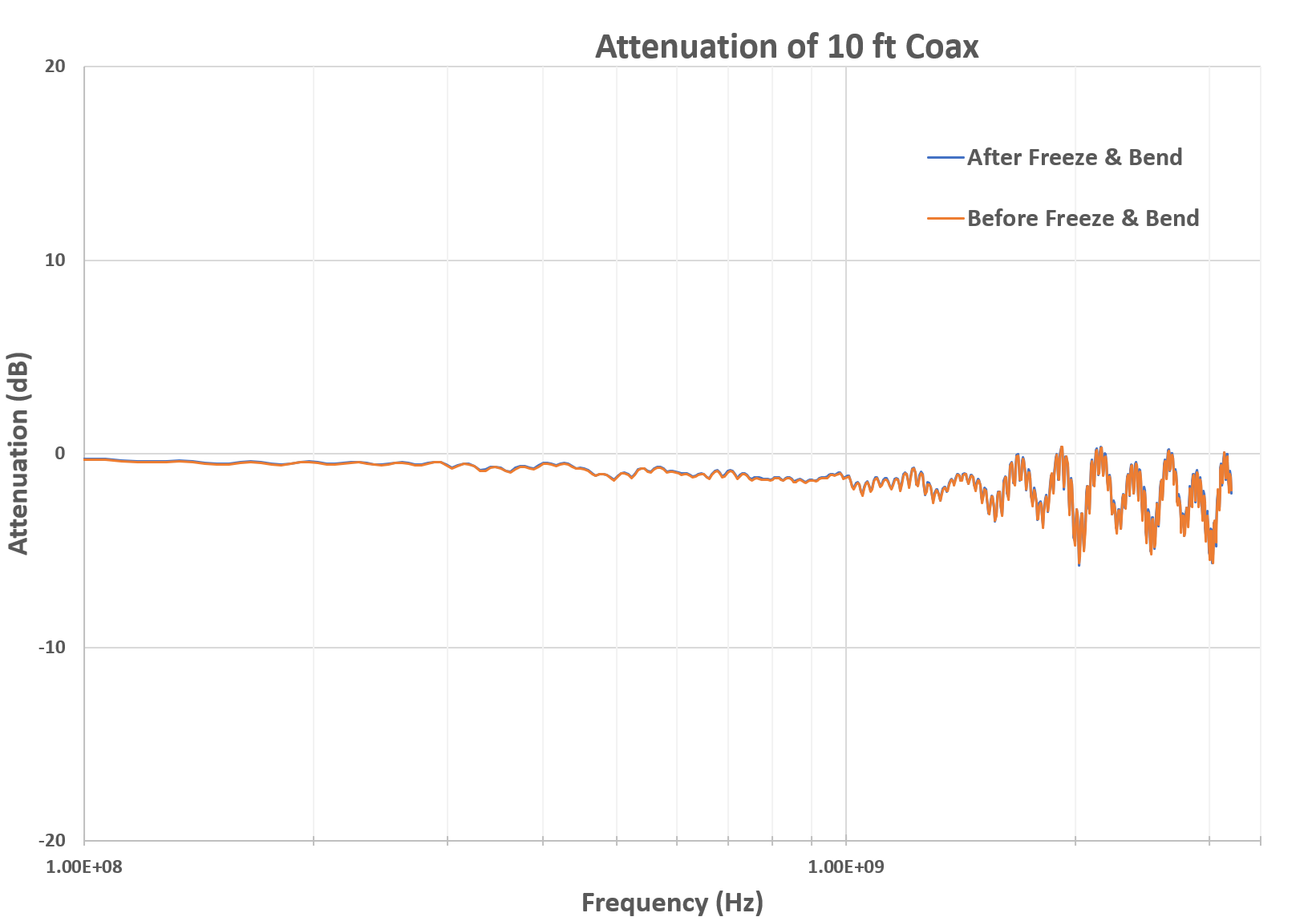 Low temperature exposure and mechanical stress can impact signal cable performance. In the case of this coaxial cable, a single cold bend test was not able to significantly impact performance.

Low temperature exposure and mechanical stress can impact signal cable performance. In the case of this coaxial cable, a single cold bend test was not able to significantly impact performance.

While this test and its consequences are obvious for power cables, there are also consequences for signal cables. For coaxial cables such as MIL-DTL-17, the cold bend test is also a requirement. Within these coaxial/impedance-controlled cables, if there is a crack or damage to the dielectric, then there can be signal attenuation and reflections of the transmitted signal which may cause the connector system to stop functioning due to too high of a signal loss.

In the test data shown here, two attenuation traces are displayed. The first shows the attenuation of a new 10-foot coaxial cable. The second figure shows the attenuation after the cable has undergone extreme cold exposure and cold bending at -75°C (this low temperature was selected to push the material construction beyond its limits). While at the extreme temperature, the cable was wrapped around a mandrel, the sample was then returned to room temperature then the cable attenuation was evaluated. The comparison between the two data sets pre- and post-exposure show almost no change of material performance. It is likely that a connected system would not see a performance impact.

Low-temperature stressing of wire is a fact of life for many wires on aircraft. Thankfully, there are wire specific tests in place to evaluate their performance and prevent poor quality insulations from being installed on aircraft. Tests such as the AS4373 method 702 help to determine wire performance in these situations.