Risk and safety assessments of vehicles are not new concepts. The fundamental ideas behind evaluating the safety and reliability of a system go back decades. And because of this, there are well established methodologies and practices around these activities. However, just because these are well vetted methodologies does not mean that there is not room for improvement or necessary modifications to align them with the specific needs of unique applications.

Take for example the safety assessment of small aircraft systems and equipment. While it could be evaluated in the same way that a wide body aircraft would be evaluated, the effort to assess the vehicle would likely inhibit the development and times of market for a vehicle that only carries one to 12 people. To support the small aircraft manufacturers, the ASTM released a document on, “standard practice for safety assessment of systems and equipment in small aircraft”. Here, we review this document, its implications, and how it impacts the electrical wiring interconnect system (EWIS) assessment.

While the first version of ASTM F3230 was released in 2017, with the latest version released in 2020; such a short timeline to a new revision typically identifies the standard has several adopters. From an adoption standpoint, it helps that the FAA includes the ASTM F3230 as part of the “Part 23 Accepted Means of Compliance Based on ASTM Consensus Standards”. While there is not a hard requirement to follow the standard, there is certainly a benefit to following FAA recommended processes as this limits the amount of time to develop new processes and gain acceptance from regulators.

ASTM F3230 is a relatively small document that contains a great deal of implications for those that wish to follow it. As the document identifies, it covers, “internationally accepted methods for conducting safety assessments of systems and equipment for small aircraft” (small aircraft defined as those with a takeoff weight less than 12,500 lbs). The basic idea behind the F3230 is to limit the total number of assessments to those that are of particular concern for aircraft safety. This aligns with the change of part 23 aircraft the FAA has implemented for a more performance-based certification approach versus the detailed and prescriptive approach that the FAA used prior to 2016. Under the new requirements, applicants must perform their own assessment of their vehicle to determine which assessments are necessary to ensure safe and reliable flight. This change to the part 23 regulations could not have come at a better time to support the emerging eVTOL market because this eliminates the need for the FAA to define new requirements for every type of configuration and allows the applicant the flexibility of design and approach.

There are two main areas of the F3230 process. First, is the failure condition classification. A failure condition is one that has an effect on the aircraft and or its occupants which is caused by one or more failures. This failure condition may be at any phase and flight. It may be due to internal or external events; the event severity is not particularly important at this stage of the overall evaluation. The initial evaluation is to perform a functional hazard assessment (FHA) in line with the recommendations of SAE ARP4761. This will help to identify which failure conditions are of risk to aircraft safety. The FHA will usually capture the functional failure (e.g., loss of system functionality such as loss of communications), how it manifests (e.g., crew unable to communicate with air traffic control), and its criticality (e.g., Major), and this is applied across all of the aircraft functions. 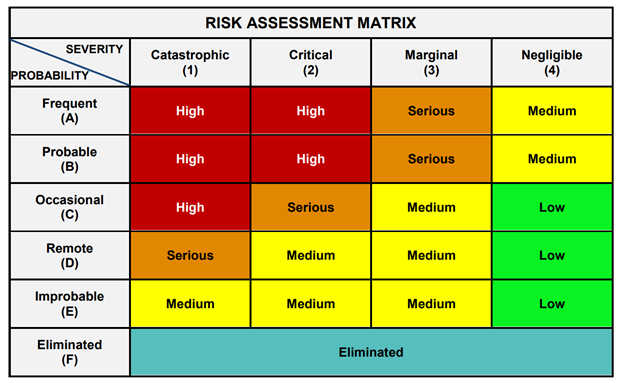 The classic risk assessment methodologies are applicable for a wide range of applications. The ASTM F3230 provides a means to align it with the certification needs of small aircraft

The classic risk assessment methodologies are applicable for a wide range of applications. The ASTM F3230 provides a means to align it with the certification needs of small aircraft

Caption: the classic risk assessment methodologies are applicable for a wide range of applications. The ASTM F3230 provides a means to align it with the certification needs of small aircraft.

The F3230 presents two primary means of performing the analysis which include fault tree analysis and the failure modes and effects analysis (FMEAs). These analyses fit into specific parts of the risk assessment and the F3230 provides a flow chart to help users identify the best means to address their systems. This includes the consideration if the system is complex or a relatively simple system.

From an EWIS perspective, the F3230 process is only as good as those who work through the failure conditions. If the wiring system is not considered under the means of failure and potential effects, then it can potentially be forgotten as part of the overall evaluation. As such, those that employ the standard should be at least familiar with the requirements of 25.17XX so that it can be drawn upon when the failure conditions are being considered. This is not to say that small aircraft should be in full compliance with the EWIS regulations, but the regulations should be considered to ensure a reliable and robust system. After all, a lot of research and development has gone into the development of improving the wiring system and it should be used and drawn upon by aircraft manufacturers.

For those that are relying on the F3230 for their small aircraft assessments, Lectromec suggests that the following EWIS related failure modes be considered as part of the overall assessment:

Tools such as Lectromec’s EWIS Risk Assessment Tool (EWIS RAT) and Arc Damage Modeling Tool (ADMT) are just as applicable for small aircraft as they are for large transport vehicles. These software tools can help to rapidly assess the aircraft’s EWIS risk.

The ASTM F3230 standard is a necessary support document for those seeking certification to the Part 23 regulations. It provides the top level guidance on how to structure the system safety approach, but much of the details on how to execute the assessments are contained in other standards. Since no specific system is highlighted in the ASTM F3230, the EWIS is just as important as all other aircraft systems. The key here is that the EWIS will not appear in the FHAs as the EWIS supports aircraft functionality; the EWIS emerges as part of the classification-based analysis. If those building the fault trees and FMEAs are familiar with the properties of EWIS, it will be possible to properly integrate EWIS into the overall assessment.

Those in need of EWIS support are invited to consider the Lectromec engineering team. We have worked on dozens of projects and can help your project properly assess the aircraft level EWIS risks. Contact Lectromec to find out more.