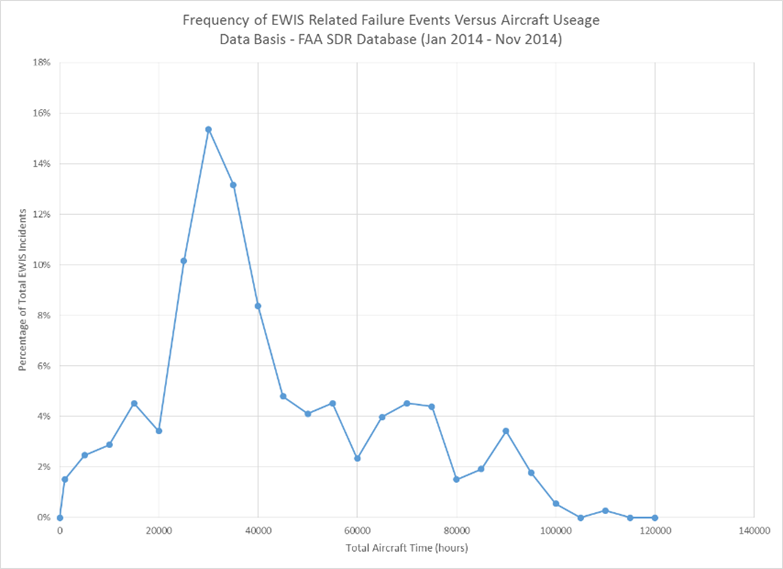 Periodically, Lectromec reviews the state of the industry and EWIS failure rates. It is unfortunate that the FAA no longer releases these alerts. However, the FAA still provides a wealth of information on system failures as part of their service difficultly report database (SDR). Lectromec has compiled a list of additional failure database sources.

The following information was gathered during a recent assessment of EWIS component failures reported in the FAA service difficultly report database. The data presented here focuses on the January – November data in the SDR database as of November 16, 2014 for incidents reported to have occurred during 2014.

Before taking too much from the information presented here, it is important to note that no effort was made to normalize the data to the number of aircraft in each segment.

Some of Lectromec’s conclusions from the data review:

During landing the f/a [flight attendant] reported that when she turned on the cabin lights for landing, smoke developed out of the front ceiling vents along with a strong electrical odor. The f/a deactiveated the cabin lights and the smoke and the smoke and odor went away. The acft [aircraft] landed without incident, where maintenance r&r the light harness above the windscreen, operationally tested with no defects, and the acft was approved for return to service. [SDR Tracking number ASOA20140904114]

An interesting detail included in a service difficulty report:

As the entertainment system is a non-critical system, capping and stowing the harnesses before flight is acceptable as long as failure has been addressed and no additional failure is possible at the location.