EWIS SLEP: 5 days in the desert

A-10 Aircraft stored at AMARG

As part of a project with the US Navy, Lectromec staff was in Tucson for one week supporting a service life extension program (SLEP). We all know that aircraft are designed for a given number of flight hours. One question that an asset manager may ask is if the aircraft has reached this threshold, is it still able to accomplish its mission? In the terms of commercial aircraft, can the asset deliver passengers safely and reliably? It is only reasonable that an assessment should be performed to determine what changes might be necessary to accomplish this.

For the US military, there are already established procedures for structures, subsystems, and now EWIS (MECSIP – MIL-STD-1798 referencing the processes outlined in MIL-HDBK-525). To determine the remaining life of the platform’s wires, several aircraft were identified by the Navy for wire harness extraction and lab analysis. Lectromec was on-site for pre-extraction assessments of the harnesses and documentation. Find out more on how you can address your life extension needs.

Founded in 1946, the 309th Aerospace Maintenance and Regeneration Group (AMARG) is located in Tucson, Arizona and is the “boneyard” for Navy, Air Force, and Army aircraft. Due to the dry conditions and the hard soil, Tucson is the ideal location for the idle equipment. Climatic conditions gives this area one of the best opportunities in the United States to limit corrosion.

Like all Air Force bases, AMARG, attached to the Davis-Monthan Air Force Base, has a large footprint. But for those that have been through the satellite photos of the area, it does not do justice to the square miles of idle equipment.

When driving through the facility, the number of aircraft at times is almost overwhelming – particularly when you are searching for a particular tail number in a field of hundreds. One estimate heard while in the boneyard was that there was up to $45 billion in assets sitting idle in the field.

In addition to the typical considerations for those working in an arid environment (sunblock, water, and keeping cool), one of the important issues to keep in mind was the need to be aware of snakes, black widow spiders, and swarms of ants. At the start of the day, banging on aircraft is recommended to scare off any critters that have made the aircraft their home.

Among the fields of aircraft were rows and rows of A-10’s. Many readers have an appreciation for the slow flying cannon with an aircraft built around it. In the photo below, the cockpit, flaps, gun ports, and engines are sealed from the elements.

As part of the storage process, the munitions, ejection seats, and several of the critical electronic equipment boxes are removed from the aircraft. Then the fuel system is drained and lightweight oil is applied to prevent corrosion.

There are four categories of storage for planes at AMARG:

Aircraft are stored with limited modifications for future use. Many of the aircraft that sit in the desert are still in working condition. One claim heard while there, was that it would be possible, given the crews were available, to bring an aircraft out of the desert and back into service in just a couple of days. Based on how well these aircraft are sealed, and the minimal structural corrosion, it seems possible.

Aircraft are stored for parts to be salvaged to support the fleet. This may be done to help reduce fleet maintenance costs or to support assessments done during Service Life Extension Programs (SLEPs). The aircraft that Lectromec staff were working on fell into this category.

These aircraft stay at AMARG for shorter durations but are in a similar condition as the “Long Term” aircraft.

Aircraft are sold off whole or in parts. Some aircraft that are retired from service are marked for Foreign Military Sales (FMS). The aerospace maintenance and regeneration squad prepare these aircraft for sale and return to service.

For those aircraft that no longer fit into any of these categories, they are marked for reclamation. The entire aircraft is torn apart at a local facility and the shredded parts are sold as scrap. Check out this informative video on the whole process of aircraft destruction. 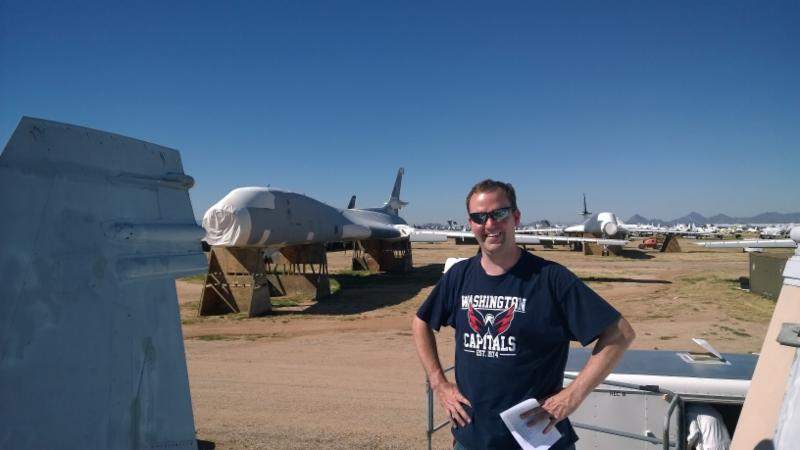 Michael Traskos in the boneyard

Michael Traskos in the boneyard

One of the interesting aircraft found among the AMARG aircraft is the YC-14. Designed with two engines mounted high on the wings against the fuselage, this aircraft stands out like a sore thumb among its fellow aircraft. Only two of these aircraft were ever built.

Both the military and commercial markets are looking for ways to extend the service life of their aircraft. In addition to the more common and visible components, the EWIS must also be considered. This task can be done in an economical manner to ensure that you get the most value out of your platforms.