Next 15 Years of EWIS Design

The field of aircraft Electrical Wiring Interconnection Systems (EWIS) has changed significantly in the last two decades. These changes have impacted the design, installation, maintenance, and sustainment of electrical wiring systems on aircraft. For example, increased electrical load requirements, materials restrictions, system safety assessment, and new regulations are just some of the areas that have required an augmented approach to signal and power delivery. In this article, we consider the area which will likely see a significant evolution in the coming year.

The purpose of distributed power systems is that multiple power nodes existing in the aircraft electrical system and equipment connect to these nodes rather than connect to circuit breakers in the flight deck. The benefit of the distributed power system network is an improvement in system reliability. The loss of a single node/component in this network, unless at the origin or destination, is not a system crippling event.

Looking more closely at what an idealized network would look like, a networked system would not only handle power but signal and data. As with any system design, there are drawbacks. The additional interconnection points will create an increase in data latencies and noise. Any connected system to this distributed data network must be designed to handle the additional latency with each connection point.

Furthermore, the adaptability of these systems is high. In an idealized implementation, if a new device is added to aircraft, a configuration update is made to the distributed power system and the device is connected to the closest node. This can provide a huge reduction in time to implement any new device or technology. There are some concerns that come with this means of deployment, in particular, how isolated are the systems in term of EMI, regenerative power, and if a power quality. Each of these must be considered during implementation.

Further, there are significant challenges when it comes to understanding the complexity of these systems as they become more networked. The certification requirements for EWIS, such as those that cover the risk assessment of the wiring system, set expectations both on assessing the physical and functional impact of failure.

Consider the power cables. Before the use of distributed power systems, the wiring was spread across multiple areas within the aircraft. One of the benefits of this design approach was that the amount of electrical power available at any single harness was much less. By going to networked power, each section of the network distribution must have larger gauge interconnections. This creates an issue by requiring a greater physical separation distance from nearby systems.

Considering the complexity of the network, depending on how the system is designed, it may be possible to effectively engineer out the need to consider a failure of EWIS in fault tree assessment. However, until that is achieved, showing the reliability of EWIS will become more difficult. The network figure shows an example of a network with the loss of a single node. Historically this has been simplified in risk assessments, to a single value to the EWIS of a given system; however, the increased complexity requires a more in-depth review. Tools like Lectromec’s EWIS RAT can reduce the complexity of assessment. 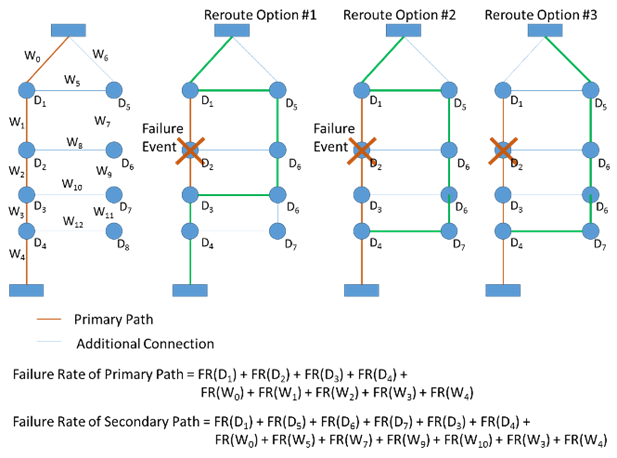 Simplified representation of node failure in a distributed power/data network.

Simplified representation of node failure in a distributed power/data network.

To determine what will need to be addressed for the next generation of EWIS components, the requirements and trends of other parts of the aircraft design must be considered. Often, EWIS is not a design driver, other systems are designed and the EWIS must match the requirements of these systems.

Without a doubt, data generated by components and health monitoring will require more data generation. How this data is transmitted will create the need for deployment of high-quality data cables will be a larger portion of the next generation EWIS design. This may be pushed toward fiber or shielded copper cables, but the data rate and reliability will drive the market.

The big stressors on aircraft wire will still be the installation and maintenance. How will the next generation handle this? Tougher insulating materials will be the starting point. Currently, there are significant improvements in insulation technologies that are working their way to market and they show promise for long-term longevity.

At sea level, it takes 1000V to cross a 1mm gap, and that scales linearly as the voltage increases. If we look at a typical connector with a pin spacing of 2.5mm (minimum separation distance between contacts), that would suggest that a need to use less than a 2500V differential (peak voltage, not RMS) between two pins and still be safe (safe is defined here as not having energy jump from one pin to another).

With this in mind, how the EWIS will support the higher voltages requires consideration at the device level and system implementation level. Each of these high voltage switching devices will need to be able to break the circuit, and thus, will require larger gaps between contact pads and larger packaging to contain the switching. At the system level, this may require that system wiring is further separated from critical aircraft components (e.g. fuel tanks) and from signal wiring to avoid EMI. These are only some of the challenges of implementation of the higher voltage system.

The changes to aircraft EWIS over the next generation will be driven by distributed networks and higher voltage power. The only way to achieve this in a safe and reliable fashion will be with a focus on the risk assessment of the aircraft’s EWIS design. Let Lectromec quantify these risks through testing and/or EWIS risk assessment.