While troubleshooting AC electrical outlets for being inoperative,(we) removed a floor panel to access the AC inverter and smelled burning plastic. We found this system had self-resetting circuit breakers installed that had been(resetting themselves)—and were continuing to reset (themselves)—allowing the Kapton wire insulation and spiral wrap to burn. One of the areas that burned was only three inches below a carbon flight control rod. I believe had this happened on a very long flight the outcome could have been very tragic. (It is suggested…) replacing these circuit breakers with (manually operated) circuit breakers would prevent the damage (which this report describes). [Original Part: Kilxon Circuit breaker; P/N M13516/5-1; aircraft total time not provided.]

After takeoff upon turning both landing lights switches off there was a spark coming out of the switch. Spliced and repositioned wire at LT landing light switch.Ops check good. (k) 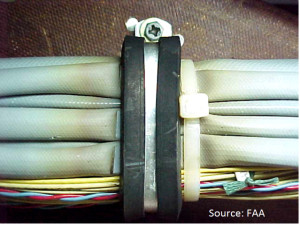 Tie wrap was missing from the clamp at FS 201.50, which allowed the wiring bundle containing the wires for the flap sys primary motor to sag and chafe through wire NR CC75 to the flap system and partially through LA61 to the cargo area lights on the bulkhead. This caused the flaps to only receive power to the primary motor in one direction. Since wire LA61 wasn’t chaffed completely through the cargo area lights were still working.

During preflight inspection the crew reported a smoke odor coming from seats 3 & 4a. The A/C was released on MEL 33-20-00 Cat C control NR 153947. The ac landed, where maintenance removed and replaced the light socket harness assy at row 4A, operationally checked with no defects, removed the MEL, and the A/C was approved for return to service.

CLE flight NR2320 the crew reported an air/ground fail message in flight. The gear would not retract. The A/C returned to CLE and landed without incident. Maintenance inspected and replaced the nose gear wow harness and proximity switch. Ops checks were good.

Found wiring to freeze switch had chafed through the capillary tube temp sensor releasing all its refrigerant, causing switch to open and not allow compressor to run. Switch not field replaceable, had to sent to factory for repairs. Installed spiral wrap anti-chafe to wiring on repaired part to prevent reoccurrence. Notified mfg product support of problem and was told a service bulletin would be issued.

APU fire detection circuit breaker popped on RT cockpit circuit breaker panel during power up of aircraft. Troubleshot system found wiring chafed at fuselage station 614.210 aft equipment bay upper avionics shelf support angle PN 4525708307. The angle does not have any protection to prevent chafing of wiring from the factory and it appears that clearance is not great enough to keep the wiring from chafing. Have notified mfg tech support.