The basic tool kit to understand aircraft wiring goes beyond some of the basics. Here are some topics of interest:

Materials that are insulators

The insulating materials for aircraft wiring are almost always organic. The exceptions would be where fiber glass is used along with a polymer, e.g., with Poly (vinyl chloride) and silicon rubber. However, their usage is relatively limited currently in most aircraft. Also, inorganic fillers sometimes are used with a polymer. In some other wiring applications, ceramics are used for insulation.

As indicated above, organic wiring insulation used in aircraft is polymeric. The definition of a polymer is “a long molecule which contains a chain of atoms”.[i] This definition is very broad and encompasses living material that is life itself to highly sophisticated synthetic materials. The “chain of atoms” actually is composed of small groups of atoms that have a periodic structure that is repeated many times. While a few naturally occurring polymers are employed for insulation purposes, most insulating materials used today for wiring are synthetic. Organic polymers, due to their structure and composition, almost always are insulators, i.e., they have a band gap of approximately three or more eV- see the discussion below on the physical basis of insulators for details.

There are several classes of polymers that have been employed for wire insulation: hydrocarbons, halogenated polymers, nitrogen containing polymers, polyesters, silicones, cellulose, and varnish. The last two categories often are from natural sources. Only a selected few materials from the above classes have been used for wire insulation in aircraft. The reasons for this involve both specific chemical and physical properties of a material as it relates to aircraft usage. Such factors as weight, thickness, resistance to attack, both from chemical and physical sources, etc., are considered when choosing materials for aircraft wire insulation.  Other applications where electrical insulation is required make greater use of more common polymers. See the individual material pages for more information.

What is an insulator?

Perhaps the way to answer this question is to consider the difference between an insulator and conductor. One approach is to consider resistivity, which is defined as resistance to the passage of electrical current through a material. This quantity, in units of Ohm-cm or Ohm-m (keeping to MKS units) can vary well over twenty five orders of magnitude, e.g., some metals have a value of  approximately 10-8 Ohms-m to about 1017 Ohms-m for quartz. Semiconductors, e.g., silicon, have values that fall midway between those typical for conductors and insulators. This range of values is one of the largest for any physical material property.

If you are interested in more information on aircraft writing, you can read Lectromec’s Wire Flammability for Aircraft Wiring article. 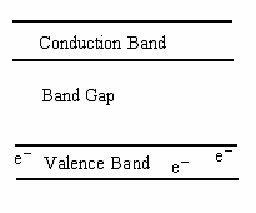 Energy level diagram for an insulator or semi-conductor; the widths of the various levels are not scaled to actual energy values.

Energy level diagram for an insulator or semi-conductor; the widths of the various levels are not scaled to actual energy values.