There have been significant developments in the Chinese aerospace industry over the last couple of years. The largest of these developments is the design commencement of the Comac C919 narrow-body aircraft. It is a huge undertaking with the projected introduction into service in 2018.

It has been necessary to standup an infrastructure capable to support this massive aerospace project. The infrastructure considerations include a regulatory framework capable of certifying the new aircraft. For those organizations looking to work in the China market, it is necessary to understand the Civil Aviation Administration of China (CAAC) requirements and regulations in regards to EWIS.

The FAA’s EWIS regulations released in 2008 created new requirements governing EWIS system design, maintainability, modification, and certification. These regulations were the result of a decade-long effort that included thousands of man-hours of research, inspections, and analysis. All put together, the seventeen regulations made up the Part 25.1700 series. 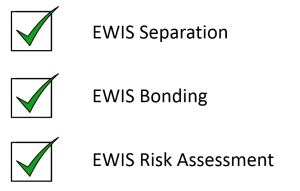 Understanding the requirements and depth of testing, design, and analysis necessary to meet regulatory expectations is not something that can be achieved overnight. Those who are familiar with the FAA’s EWIS certification requirements will have an advantage in the Chinese aerospace industry. The following is a listing of the FAA’s EWIS requirements vis-à-vis the CAA of China.

One thing that is immediately apparent is that the regulation requirement sections seem to match up one-to-one. This certainly helps those that are creating certification packages for multiple organizations.

Technologies and evaluations that have been shown to meet FAA EWIS regulations will find common ground with the current CAA regulations. Tools and analyses developed with a focus on FAA regulatory requirements (such as Lectromec’s EWIS RAT and ADMT) can be easily integrated into existing processes for those looking to show compliance with the EWIS regulations of the CAAC.