Use of Cables on Aircraft – Part 1

Electrical wire cables are an integral part of an aircraft’s Electrical Wire Interconnection System (EWIS). It would be difficult to imagine the design of an aircraft electrical system without the use of electrical cables. The use of cables in aircraft has simplified the formation of wire harnesses and installation of electrical components (think of the ease of installing one cable versus 15 individual wires on an existing platform).

Since there is such a wide spread of cable applications, the number of options available to designers can be overwhelming (the NEMA27500 standard covers more than 100 million cable configurations). In this article, we will go over the fundamentals of cables, and overview of the constituent components of cables. Part 2 will continue with the cable design overview. 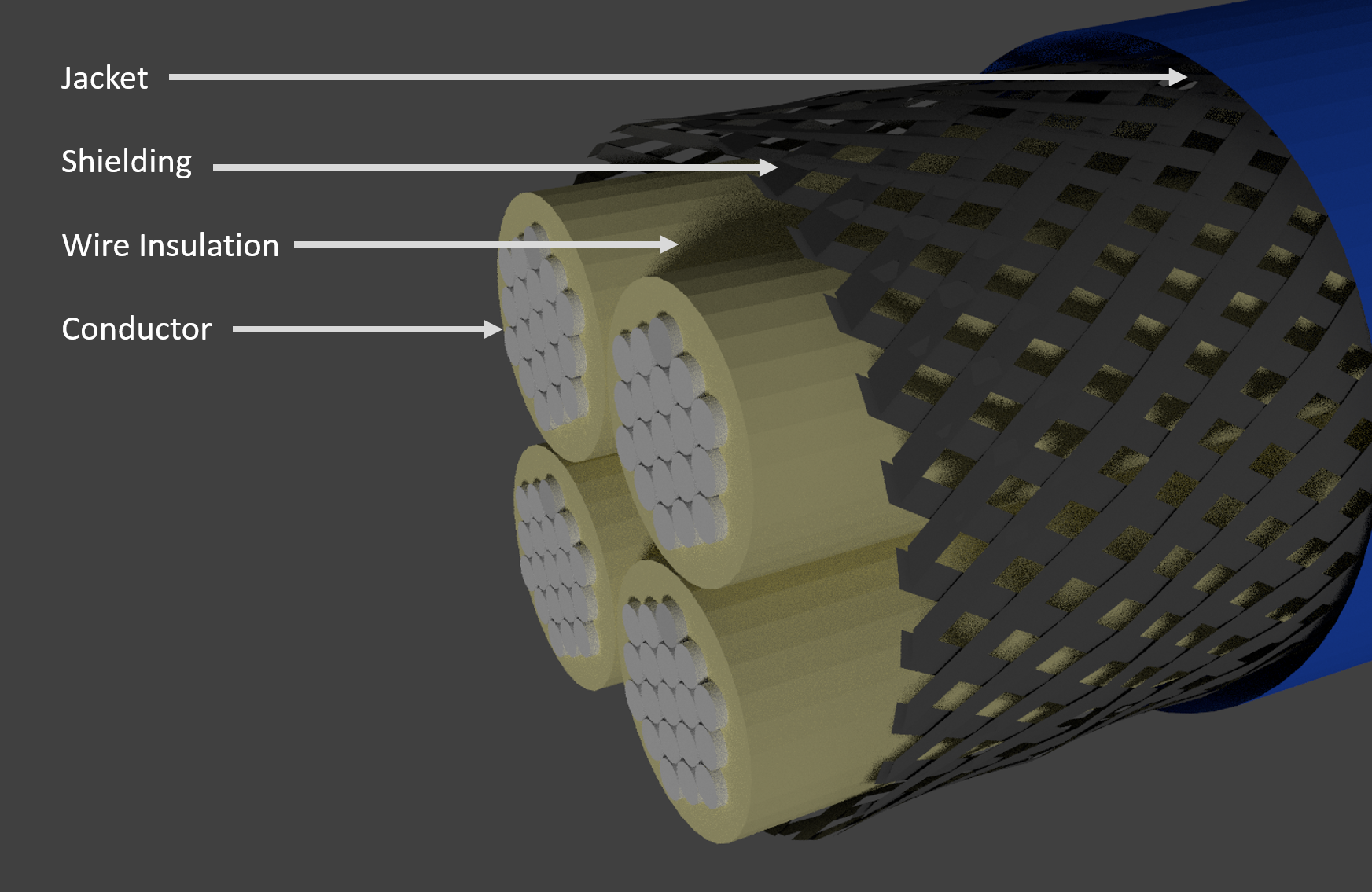 A cable is a complex system that requires significant attention to detail in design, manufacturing, and use. Are you using the right wire for your application?

A cable is a complex system that requires significant attention to detail in design, manufacturing, and use. Are you using the right wire for your application?

A cable may consist of several components, which at its most basic level is a wire that may include some or none of the following:

Cable standards, such as the NEMA 27500 (or MIL-DTL-27500), provide a framework for cable selection. For those unfamiliar with cable identifiers, the part identifiers can be intimidating, but are simple and are broken into seven parts. For this example, we will use the part number M27500 H 20 DC 15 T 24 (note: the spaces have been added for clarity).

The specification is the first part of the identification. For the 27500 style cables, the first six characters are the specification “M27500”. To find out more about the particular specification, this can be grabbed from the ASSIST website – though this is the earlier revision. The most recent version can be purchased from NEMA.

This identifier has two parts to it. The cable identification includes the use of colors to identify wire number and/or the wire size. There are six different component wire configuration identification options – more than enough to match the needs of any application. With the shielding, there are three options: no shielding, 85% coverage, and 90% coverage. Further discussion about shielding can be found in Part 6.

For NEMA style cables, the constituent wires of a cable all will be the same conductor gauge and same wire specification. For application purposes, if a system requires multiple wire gauges (e.g. to support multiple voltages and current carrying needs), a single cable will not support this – a harness consisting of wires and/cables will be required for the application.

Similar to the conductor sizing, the wire specification of the cable component wires is uniform, so only one wire type (specification and sizing) is permitted into a NEMA27500 cable. The wire specifications that are available for these cables include those from the AS22759, AS81044, MIL-DTL-25038, and MIL-DTL-81381 families.

The selection of component wire, just like standalone-wire, is based on the particular application. Factors that are the leading

The component wires are typically tested separately and are certified independently.

The engineering that goes into cable design and manufacturing cannot be understated. The selection of each part of a cable’s configuration for an application impacts not only the original design, but also how the system will be maintained. Because of the long term impact the cable selection may have (for good or bad), it can be beneficial for a comparative analysis for your application. Supported by testing and engineering knowledge, Lectromec can help to ensure the cable selected is the best for your application.

The next article will cover parts 5, 6, and 7 (Number of wires, shielding materials, and jacket materials, respectively).