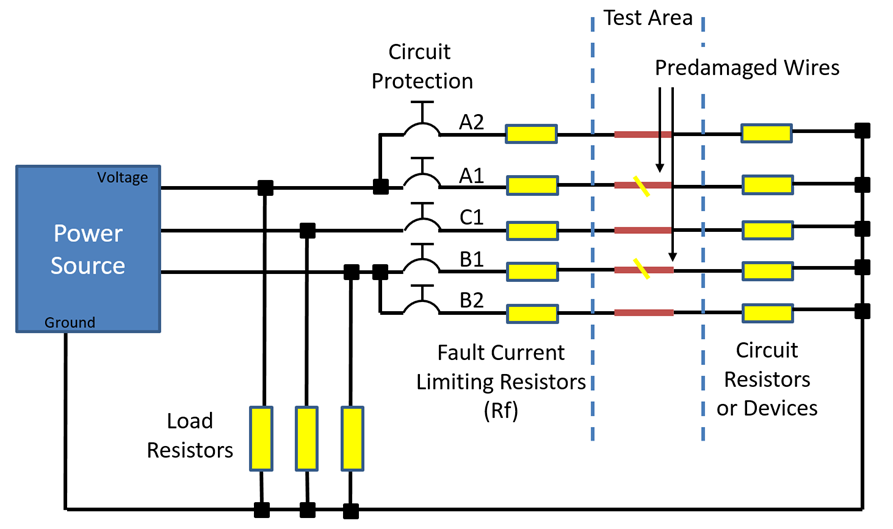 Lectromec has been testing wire for the past thirty years. We have seen nearly every conceivable variation of aircraft wire testing. Some tests are straight forward and require little or no additional explanation of the test results; other tests require a fair bit of explanation to understand the test itself and what the results mean. One question that Lectromec frequently gets when clients receive the results of arc track resistance tests is, “Why is it that the higher resistance circuit configurations result in more damaging arcing events (the ones that cause the most damage to other wires in the test harness)?”

Text-based descriptions of arc track resistance testing can be confusing. If you would prefer to start with a video presentation, you may want to watch this two-minute video.

When performing arc resistance tests, the standard practice is that several circuit resistance values are used. In the circuit diagram below, the adjustable resistors (Rf) range from 0.0Ω (no added circuit resistance) to 2.0Ω for a 20AWG wire test. Three tests are performed at each circuit resistance (defined in the particular test standard) and the pass-fail criteria of the test are wire specification specific (see Lectromec’s What do the Results of Arc Track Resistance Testing Mean? article on this.

The following figure shows a typical circuit protection trip curve. At high currents, the circuit protection activates very quickly, at lower currents the activation time is much shorter. The green band in the figure shows typical operating temperatures. The outside bands above and below show representative trip times at elevated and sub-zero temperatures respectively.

The following table shows a couple of representative cases for the circuit resistance and total energy in an arcing event. In the case shown here, three assumptions are made:

In the 0.0Ω condition, the total circuit resistance during an arcing event, plus the arc itself, is about 0.85Ω. The RMS current is about 32 times greater than the circuit breaker rating. This is far beyond the typical trip curve shown in the previous figure and can be assumed to cause circuit protection activation after about 0.05seconds or about 20 cycles at 400 Hz (verified by testing). This short event creates a scenario generating about 2500J of arc energy.

In the 2.0Ω condition, the total circuit resistance during an arcing event, plus the arc itself, yields a resistance of 4.85Ω, a roughly five time greater circuit resistance compared to the 0.0 Ω circuit resistance. The RMS current for the 2.0Ω test is about six times greater than the circuit breaker rating – an overcurrent level within the circuit protection specification. The trip time ranges from 0.3 – 0.8 seconds and, for the calculation shown, 0.55 seconds is used. Based on these calculations, the 2.0Ω configuration would generate an arcing event lasting 11 times longer and a total energy of about 4900J. This energy is almost two times greater than in the 0.0Ω configuration.