Aircraft engineers should know that in recent years have shown increased talk of arcing and the possible damage to aircraft. There have been many examples of these events on aircraft.  Recently compiled data from the FAA indicates that between the years 1999 and 2004, there was an average of more than 20 reported electrical arcing events per year on commercial aircraft. The actual number may be higher as these events are under-reported.

Because of the large impact that an arcing event can have on continued airworthiness, significant efforts have been made to understand and mitigate damage done by arcs; arc resistant wire insulation and arc fault circuit breakers are examples of some of this hard work. 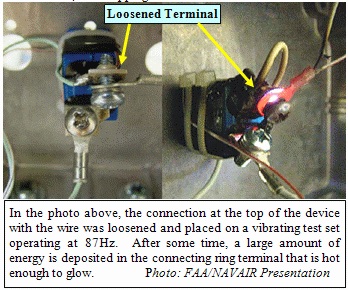 In discussions of arcing events, two different classifications of arcing have been recognized: parallel arcing and series arcing. Parallel arcing is often what is thought of when the term ‘arcing’ is used. It is characterized by a large discharge of energy that can cause large amounts of damage in only a few seconds. On the other hand, series arcing is more subtle but can still generate significant heat. This can lead to severe problems including insulation deterioration, false tripping of thermal circuit breakers or the more dramatic secondary effects of parallel arcing.

Series arcing starts with a poor connection of the conductors. The poor connection may be due to a loose terminal or crimp, corrosion, or dirt in a connection. This leads to the connection between the current carrying wire and terminal being made and broken repeatedly, sometimes many times a second. The vibration environment on a plane exacerbates the problem. In rare occasions, series arcing can occur when there is a break in a conductor inside of the insulation. 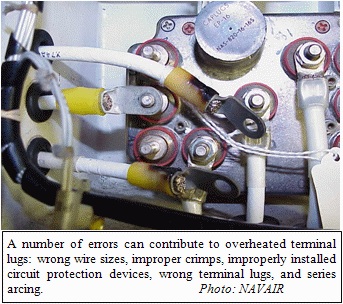 As the connection breaks, a small arc is drawn between the two contacts, it then disappears quickly as the distance between the conductors becomes too large. Though the duration of the arcing event is short, the power dissipated from the arc into the structure is much larger than there would be in a normal tight connection. This energy heats the conductors. If the frequency of the circuit interruption is low, then the energy dissipated will be low and the temperature rise of both contacts will be small. However, if the frequency is high enough, the energy discharged by the arcing can heat the conductors to a high temperature.

Difference between series and parallel arcing

In a series arc, the arc comes from interruption in a single circuit, and so the load of that circuit limits the current. That is, all of the current in the arc must also go through the load as well. The arc is in “series” with the load. For a typical circuit using 20-gauge wire the current is limited to between 1 to 5 amps.

In a parallel arc (the more dramatic type), the current goes from one wire directly to the structure (ground) or a second wire that is at a different voltage (ground or a different phase in the case of a three-phase system). The current in the arc does not go through the ‘complete’ circuit and therefore is not limited by the load; the arc is in “parallel” with the load. Only the resistance in the arc, the resistance of wire and the internal impedance of the power source limit the current in the arc. For a typical circuit using 20-gauge wire, the current can be between 50 and 100 amps or higher.

Both types of arcing, while they vary in the duration and types of damage that can be expected, can reduce the effectiveness of electrical components as well as cause damage to nearby objects that are not part of the system.  Series arcing can damage insulation and may lead to the more damaging parallel arcing.  Ensuring that termination points for wires are properly secured with the correct size terminal lugs can minimize the risks of series arcing.