In the Basic concepts of Wire Degradation article, we reviewed the degradation of wire insulation from a laboratory perspective. This article discusses some the findings of the Federal Aviation Administration (FAA) Intrusive Inspection Project fact-finding committee with information on aircraft wire systems.

One of the most thorough publicly available sources for understanding the aging of wire in aircraft is the FAA Intrusive Inspection Report, published on January 21, 2003. The Intrusive Inspection Project was undertaken in 1998 by the FAA following the major aviation incidents in the mid 90’s. The project’s goal was to conduct visual inspections on eight recently decommissioned aircraft and identify wiring conditions that could lead to hazardous or catastrophic events.

This work generated very valuable information on best wiring practices and the use of wire characteristics  to improve safety of aging aircraft. First and foremost, a large number of wiring practices were identified, catalogued, and turned into a long list of “wiring no-no’s”. Many of these were identified in the FAA Job Aid on wiring.

Also, the visual inspection teams identified a wide variety of wire faults. The follow chart is from the FAA Intrusive Inspection. It shows that wear and tear on the wiring is a large portion of wire faults. 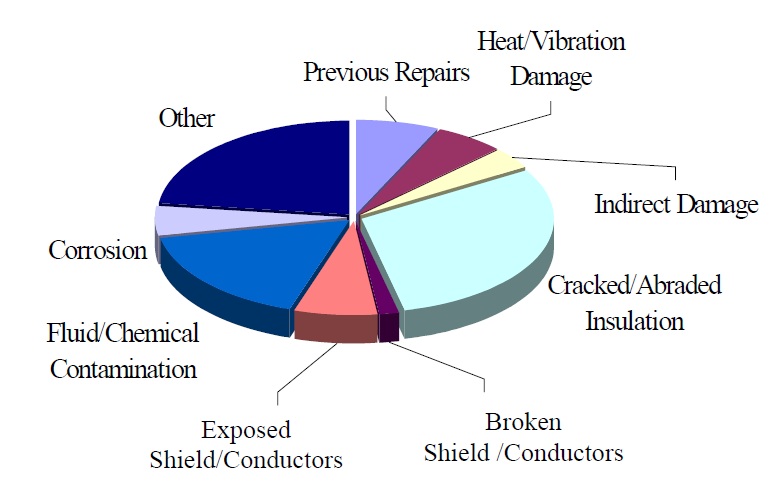 Lastly, one of the most important findings of the Intrusive Inspections Report was that a trained team could miss many wire insulation breaches a on a wire bundle. For example, a trained team thoroughly inspected a wiring bundle and found two breaches. Afterwards, Lectromec utilized the DelTest technology on the same bundle and found 60 breaches (all were later verified). This clearly indicates that visual inspection alone is not enough when examining the wiring of an existing aircraft.

Overall, the FAA’s Intrusive Inspection Report findings and recommendations can be used as a starting point for visual inspection manuals, directed maintenance, and incident investigations.