For the last 17 years, Lectromec publications have discussed items related to the aerospace wiring installation standard AS50881. The standard is often referenced in many of our articles (ampacity, comparison to other standards, etc.), in fact, a review found that the AS50881 is mentioned in about 20% of Lectromec’s articles. But at its core, Lectromec has never really talked about what this standard is, why it should be used, who should use the standard, and what should be considered when the standard is employed.

To remedy this oversight, this article seeks to address the question many come to ask when approaching EWIS: why should I care about AS50881?

The stated objective of AS50881 is to cover:

“…all aspects in Electrical Wiring Interconnection Systems (EWIS) from the selection through installation of wiring and wiring devices and optical cabling and termination devices used in aerospace vehicles. Aerospace vehicles include manned and unmanned airplanes, helicopters, lighter-than-air vehicles, missiles and external pods.”

In this way, the intent is to cover the EWIS needs for most aerospace vehicles. Naturally, the AS50881 is a generalized standard and customization is necessary for each OEM. Lectromec has found that most OEMs use standards like AS50881 as a basis then build on them to address specific vehicle requirements and to align the standard with internal procedures. Using an industry standard as a starting point is good from a certification perspective as it reduces work on engineers to figure out every configuration and need, but also reduces the likelihood of introducing installation or EWIS design techniques that require testing to show reliability.

Furthermore, because the AS50881 is a generalized standard, deviations are common but should only be pursued when the deviation is supported by sufficient justification. For example, changing the clamping recommendation from 24 inches to 36 inches because, “the struts are 36 inches apart and clamping every 24 inches would be difficult and add weight” is not a valid justification.

In the long-long ago, before wiring became a system and was placed under the umbrella of “EWIS”, aircraft wiring requirements were first codified in various documents. The US military’s attempt at codification was the development of a wiring installation standard with the document identification MIL–STD–5088. For those that have attended SAE meetings or have worked on older platforms, you will often hear the AS50881 referred to as “5088”.

The document remained part of the US military standards until the 1990s when it was transferred to the SAE. It is at this time that it became the standard that we know today AS50881. It is interesting that this transfer from military to civilian control of the document occurred at the same time that there was a significant change around wiring systems. With the formal adoption of EWIS in 2003 and commercial aircraft (Part 25) requirements in 2007, the AS50881 was at the right place for widespread commercial adoption. 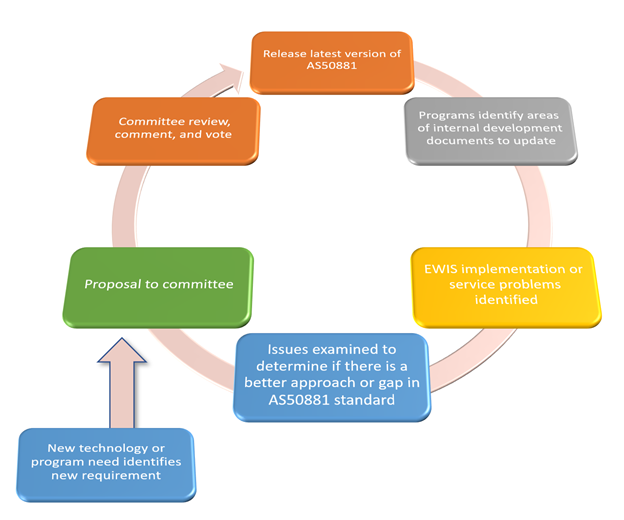 The development cycle of the AS50881 is one that provides incremental improvements and addresses the new and evolving EWIS requirements and as well as EWIS component capabilities.

The development cycle of the AS50881 is one that provides incremental improvements and addresses the new and evolving EWIS requirements and as well as EWIS component capabilities.

As the AS50881’s origin is one specifically to align aircraft wiring requirements to support military applications, the requirements address the tough military vehicle operational environments including fighter aircraft; this legacy is still part of the current AS50881. For those working on commercial or civilian aircraft, the requirements for AS50881 can seem to be excessive and potentially difficult to achieve. This is sometimes addressed in the AS50881 with phrases like “for US military aircraft” or “US military applications”.

Here is perhaps the most important part: what is on the inside. The AS50881 goes through the consideration of part selection, installation requirements, secondary supports, orientation of bundles, and just about anything necessary to consider when installing wiring.

For many elements of EWIS design, the AS50881 provides recommendations on which parts are best suited to address the application need. Naturally, the recommended EWIS equipment are qualified parts (those that have been tested to aerospace standards and have ongoing product verification/QA) and those that have been qualified to SAE standards or those with active US military specifications. This basis for relying on qualified parts is fundamental to a reliable EWIS. The selection of parts that are not qualified and do not rest on industry standards created heavy burdens on OEMs who have to support the part selection and perform testing to ensure that it is a qualified part.

The AS50881 also provides recommendations on which parts are best for specific applications and some of the limiting factors associated with them. For example, factors such as conductor plating performance and degradation mechanisms are discussed. For example, the concerns with Silver-plated conductors and the impact of ethylene glycol.

In engineering, one quickly learns that there is usually a standard for everything. Going one step further, if the field has been around for more than 10 years, it is likely that there are several standards. Wiring is no exception. Here are a couple of the alternative standards to the AS50881:

The AS50881 standard is active with an updated release every two to four years. A couple of years ago, Lectromec performed an evaluation of the standard to see how much had been added or changed since 2000. Our assessment found an average yearly change of about 3%. While that does not seem like much, over a 14 year period that comes out to be about a 50% change and update.

While it is impossible to cover, “all aspects in Electrical Wiring Interconnection Systems (EWIS)”, the AS50881 does cover much of the installation needs for aircraft wiring systems, and as an active document, it is expected to grow with the community. Certainly, the challenges of high voltage vehicles will require reconsideration of some design principles; however, the fundamentals of AS50081 are still a good starting point for any wiring system.

If you are looking for support in the development, assessment, or testing of your aerospace wiring system, contact Lectromec.