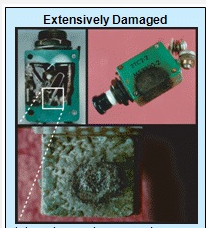 Frozen circuit breakers can have an impact on EWIS reliability. Like aircraft wiring insulation that ages over time, breakers can corrode. We use breakers as switches. This frequent use accelerates wear and further degrades their reliability. During maintenance, breakers also can be fouled by swarf (drilling particles).

According to the Aircraft Wiring Practices guide (Job Aid 1.0) produced by the Federal Aviation Administration (FAA) – and featured in our August Lectrogram newsletter – circuit breakers are subject to latent failure. “So you won’t know they have failed until you need them,” the guide observes. In other words, the number of such failed breakers residing in their racks on a typical airplane may be unknown.

About 300 breakers removed from retired transport category aircraft were examined and tested by FAA engineers working in concert with Raytheon Technical Services and Sandia National Laboratories experts. They found numerous instances of corroded and “extremely dirty” and “gooey” breakers.

Some breakers were found sprinkled with copper dust. Partially blackened terminals were found, the darkening a telltale of localized resistive heating. The 2002 report found that maintenance manuals “do not require inspection of circuit breaker panels for signs of over-heating and arcing.”

If you are interested in wire maintenance, you may want to read Lectromec’s Assessment of Mechanical Stress on Wire Insulation article.

A government-industry task force – the Aging Transport Systems Rulemaking Advisory Committee (ATSRAC) – has recommended that the unpowered breakers should be mechanically cycled periodically.

Airbus produced a service information letter June 28 on aging circuit breakers, recommending that all breakers in its airplanes be cycled over the next two years, and once every three years thereafter. Boeing will be following with similar guidance (anticipated in early 2005), and other aircraft manufacturers are expected to follow suit.

Cycling the breaker may well clear the mechanism so that it operates properly. If the contacts are welded closed, and the breaker is not exercised, a short can lead to burned contacts and subsequent wire failure because the wire is carrying more than its capacity. On the other hand, the cycling may damage partially welded contacts, such that their increased resistance can lead to overheating and burning during a short circuit. The cycling may not reliably eliminate these lurking latent failures.

Remember, a “latent” breaker failure also means one that may be discovered too late.