You may ask about EWIS evaluation of aircraft of a F-16. The results of recent testing indicated a rate of 5.4 breaches per 1000 feet of wire tested. Lectromec and InterConnect Wiring, at the 10th Aging Aircraft Conference, delivered a report describing a recently completed series of tests to evaluate the status of wire harnesses removed from an F-16 A-model aircraft. These tests were performed on a total of 35 Nomex® protected electrical wire harnesses that were being replaced with new harnesses. Both insulation breach detection (DelTest™) and chemical degradation tests (Inherent Viscosity) were performed on the wires. 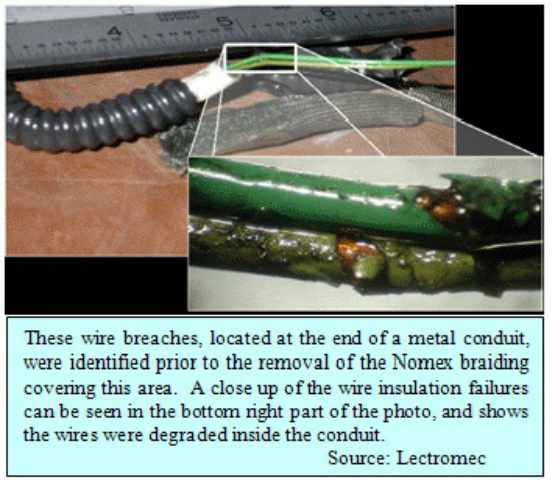 The laboratory DelTest™ detects breaches in the wire insulation that reach to the conductor. It is a snapshot of the condition of the harness on the day it was removed from the airplane. The DelTest™ process identified those wires in a harness with insulation breaches and was done without removing the Nomex® braid.  The results of testing indicated 58 insulation breaches in the more than 1500 wires tested, corresponding to a rate of 5.4 breaches per 1000 feet of wire tested. This rate is over three times higher than the insulation breach rate that was found on recently retired commercial aircraft during the FAA’s Intrusive Inspection in 1999 and 2000.

On a representative number of harnesses, a visual examination of the Nomex at the breach locations was performed and only in a few cases did moderate damage to the Nomex correspond to the breach location. Though there could have been physical trauma during the manufacturing process or while on the aircraft that did not leave a lasting mark, most of the insulation breaches seen after the removal of the Nomex® braid at the failure points are quite similar to those found in aged polyimide insulated wiring systems.

If you are interested in EWIS evaluation, you may want to read Lectromec’s Aircraft EWIS High Voltage Testing Considerations article.

From this visual examination of 28 breaches, there were five cases of multiple wire breaches that were found within an inch of one another. Photos included here show the proximity of these breaches. While it is possible for wire with breaches to operate with no problems, the likelihood of system problems, and possibly flashover, is significantly increased. In these five cases, the wires carried 28VDC. Additionally, in some of the harnesses, 115VAC wires were also present. If the breaches appeared in these wires, the potential for a damaging arc would have increased. 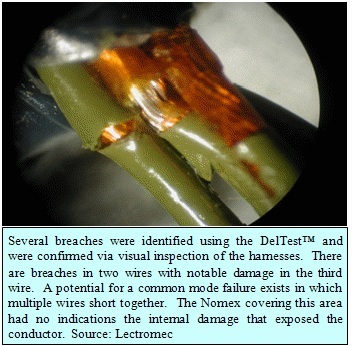 These tests were performed on wire from a single aircraft and it is uncertain how well the results can be extrapolated to the fleet. However, these tests could provide insights into planning for future harness modification and replacement schedules.