The certification of an aircraft requires the expertise of dozens of disciplines coming together for a single effort. Certainly, as the electrical wiring interconnect system (EWIS) has developed over the last couple of decades, the interaction with other systems and components is becoming better understood as the requirements are becoming more pronounced.

This two-part series covers elements of the EWIS and fuel system, how to gather the necessary data to show compliance, and achieve certification of an aircraft’s fuel system.

As a starting point, the requirements of 25.981 outline items that must be shown as part of the certification package. Specifically, the first paragraph of 25.981 states “No ignition source may be present at each point in the fuel tank or fuel tank system where catastrophic failure could occur due to ignition of fuel or vapors.” The regulation goes on to identify several specific elements that require electrical and thermal ignition sources around the fuel system to be identified and quantified. 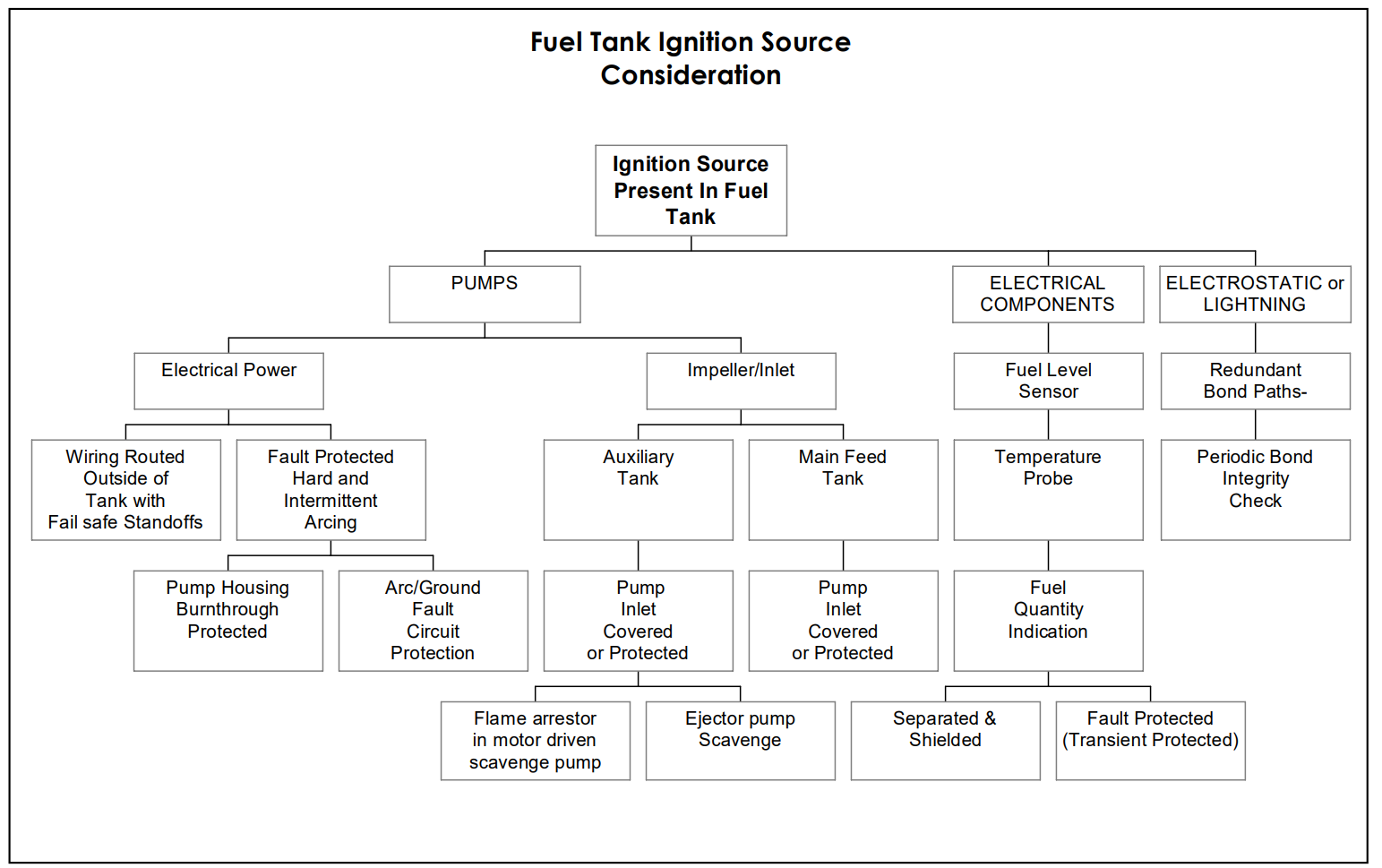 Though not an exhaustive list, this is a starting point area for review of fuel tank ignition sources. Source AC 25.981-1C.

Though not an exhaustive list, this is a starting point area for review of fuel tank ignition sources. Source AC 25.981-1C.

The electrical system cannot inject more than 200 microjoules of energy into the system. As identified in AC 25.981-1C:

“Laboratory testing has shown that the minimum ignition energy in an electrical spark required to ignite hydrocarbon fuel vapor is 200 microjoules. Therefore, for electrical or electronic systems that introduce electrical energy into fuel tanks, such as fuel quantity indicating systems, any electrical arcs or sparks that are created into any fuel tank should be less than 200 microjoules during either normal operation or operation with failures.”

To put this into perspective, a 10A current limited 28VDC arcing event can achieve this energy threshold in less than 1 microsecond. This is an extremely low threshold of energy to achieve, but it is necessary to ensure a safe aircraft.

The issues with the thermal energy are much more difficult to assess. According to the regulatory guidance in AC 25.981-1C:

“Maximum Allowable Surface Temperatures. A surface temperature within the fuel tank (the tank walls, baffles, or any components) that provides a safe margin under all normal or failure conditions, which is at least 50 °F (10 °C) below the lowest expected auto-ignition temperature of the approved fuels. The auto-ignition temperature of fuels will vary because of a variety of factors (ambient pressure, dwell time, fuel type, etc.). The value accepted by the FAA without further substantiation for kerosene fuels, such as Jet A, under static sea level conditions, is 450 °F (232.2 °C). This results in a maximum allowable surface temperature of 400 °F (204.4 °C) for an affected component surface.”

How to determine the possible surface temperature rise comes down to determining if the condition is safe (as outlined in the second excerpt from AC 25.981-1C).

Contemplate the following example: a wire harness is routed near a fuel tank and it is necessary to determine if there is adequate separation. Here we start with assuming best practices and the wiring is routed above the fuel tank (this is done to prevent fuel tank leakage from interfering with the wiring system). The wire harness is properly clamped and has a 0.5inch separation distance from the fuel tank. Lastly, the wiring harness consists of 115 VAC three phase power wires for electrical equipment that requires a 15-amp circuit protection device. What happens when an electrical arcing event occurs in this scenario?

With the electrical and thermal elements of fuel tank ignition prevention defined, the next article will examine the means of gathering the data from both a physical testing and modeling/simulation perspectives.

Can’t wait for the next article? Get a preview of some of the techniques to be discussed #1 and #2.